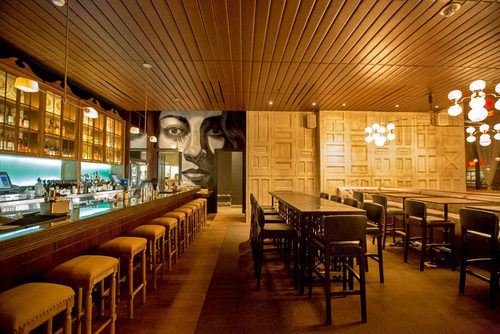 Here we are heading into spring 2014 (what?  already?) and, after a brief lull, the pace of new bars and restaurants opening in Downtown is starting to quicken again.  From Orsa & Winston to Justice to Maccheroni Republic to Wendell, Downtown is opening everything from national attention-getting restaurants to neighborhood drop-in places, all while maintaining its trendsetter pace for the region.  (And no, I haven’t written about any of these places.  Get off my back – I’m busy.  But I have had an Orsa & Winston post half written for weeks – it’ll get done, but in the meantime, do yourself a favor and go.)

As Downtown has matured (ie, the “next great city“, so says GQ), places have sort of settled into their niches – most Downtown restaurants can be generally divided into four categories:  more vibe than food (Perch, Ace Hotel), more food than vibe (Alma, the above-mentioned Orsa), special occasionish (WP 24, Rivera), or everyday comfortable-but-decent (Soleto, Bottega Louie).  A few do transcend these admittedly over-broad categories:  Bestia is great but is a) hard to get a reservation for; and b) in no man’s land.  I’m also a big fan of Terroni, but if you’re not in the mood for (yes, awesome) pasta and pizza, don’t bother.  And places like Industriel and Artisan House are going for some sort of crossover idea, but they don’t end up rising to “top of mind” status when I’m thinking of places to go, good as they can be.

But sometimes, a place opens that fills a niche that you didn’t even realize was there.  In this case, a place that is nice enough to take a date or a client but comfortable enough to pop in on a weeknight and eat in the bar.  Well located and fun but without compromising food and drink quality.  A place that makes you want to come back and try all the stuff you didn’t get to try the first time around but where it’s OK to just order an appetizer and a beer.  A place that occupies that sweet spot between “everyday” and “special occasion”, yet works for either one.  And a place with that indefinable ‘something’ that just works.  Where the music and the décor and the food and the service and the ambience create an alchemy that reminds you of what makes a great restaurant truly special.

That place, opening officially tonight, is Faith & Flower (no website yet that I can find so this is just a link to map, phone number, etc.).  Occupying the space of the late, unlamented Towne at 9th & Flower, Faith & Flower is going for turn of the century Los Angeles in its décor, except with everything from Cameo to Coldplay to Jay Z coming out of the speakers, and ‘now’ food like kimchi deviled eggs and oxtail agnolotti coming out on the plates.

Here are some pics, courtesy as usual of Eater LA:

I’m bummed that the last picture is the smallest, because that gives you the best view of the interior – check out that chandelier hanging over the oyster bar in the background.  The top view is the bar – very turn of the century, but also very comfortable.

Last night was “friends and family” night, the pre-opening night(s) that many restaurants use to iron out the kinks while serving people who will go easy on them.  However, except for some inexplicably blank pages in the menu, everything worked like a charm.  This is clearly a place run by pros who know what they’re doing – if you’ve been to the Los Angeles Food & Wine Festival, you’ve seen their handiwork (Coastal Luxury Management’s irrepressible David Bernahl and Rob Weakley).  The chef comes from a Michelin-starred restaurant in San Francisco; the pastry chef hails from French Laundry; and the cocktails stand up to almost any program in Downtown.  Hell, the cocktail glasses retail for 60 bucks each and the plates are ornate and vintage (Mrs. Enthusiast was ready to buy the whole set except these folks have the exclusive rights to them).  This is not a place where corners are cut.

What I really liked about F & F is that, throwback as it is, it feels like something of a ‘next generation’ place for Downtown.  It’s not going for “urban hip”, with subway tiles and exposed duct work.  It’s not going for overly showy.  It’s not going for “sceney”, but it’s also not explicitly “anti-sceney”.  (Just made all that up, but if you’ve read this far, you get where I’m going with this).  It’s got great food, a great wine (and beer!) list, and a great cocktail program, but it’s not screaming those things.  It’s just offering high quality everything in a relaxed-but-fun environment (including a great soundtrack) without trying too hard to be something, or *not* be something.  Downtown needed this.

So.  It opens tonight.  Go now, and impress your friends next time they want to try somewhere new.  Because you’ll want to go back.