The great thing about this little lunch quest I’m on (if you don’t know, click here to find out) is that it keeps my eyes open for places I may have missed, or forces me to venture places I don’t normally go. And the OTHER great thing about this little lunch quest is that fellow enthusiasts like you are suggesting places, offering companionship, and, most importantly, getting me into places that haven’t “officially” opened yet. Keep it coming.

So, first on the list is a place I’ve been hearing about and wanting to go. Yxta. Why haven’t I been there yet? Because it’s on 6th & Central. 6th & Central is not exactly, well, central (hence, the “outside” in the title of this post – outside what you’re used to). But this weekend, while on the way to do some tree planting at Central & Adams (and what were YOU doing at 8:00 on Saturday morning?), we passed it and decided it would be a great time to try it.

Yxta is pretty unexpected. This area is industrial with a capital I (technically, it’s the Toy District). Produce markets, fish outlets, bottling plants, toy wholesalers. This is an area where you look around and go “so THIS is where they buy all that stuff to resell me in more user friendly locations.” And, by the way, it is completely alive and going full speed on this early Saturday morning. But then, you come across this: 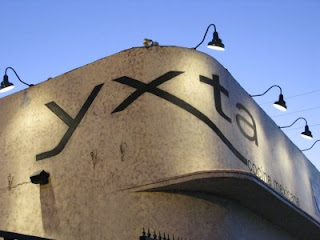 It may not look very dramatic out of context, but trust me, this is not what you expect to see driving down Central Avenue on a Saturday morning (or any other time, for that matter).

So, we walk in. It’s utterly empty. (it is Saturday afternoon, after all). But it looks great inside, too – another minor surprise:

You can’t really see it here, but there’s a very cool mirrored pattern behind the bar, a cool tryptych of American flag art on the wall, and interesting light fixtures. 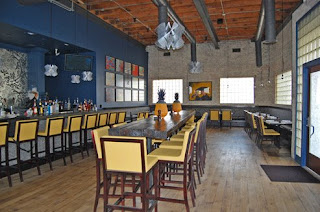 I ordered the carnitas – always a good barometer of a Mexican place. The verdict: serviceable. Other “Mexican place barometers” are margaritas and guacamole, and both of those were actively good.

All in all, I would say that in a vacuum, Yxta would get a 6.5 on the scale of decent food and interesting decor. But given that it’s at 6th & Central, it gets a couple extra points because it’s such an unexpected oasis.

Note: I’ve heard complaints about service. Our service was decent, but a) it wasn’t spectacular, and b) even by the time we left, there were only about 4 tables going. So the complaints seem credible. Just in case you go when it’s busier.

Place number 2 on today’s rundown is definitely more central: 7th & Flower. (i.e., “inside” your comfort zone). It’s Octopus Restaurant, the 8th branch of a mini chain of Japanese places in Southern California. It’s in the bottom of the Roosevelt Lofts, in the old California Roll & Sushi place.

A fellow Enthusiast helped open it up, so of course your intrepid traveler got to try it out during the soft open. What’s surprising about it? It’s too new to have pictures of the interior, but I wish I could show you the juxtaposition between outside and inside. Outside is a fairly bold but somehow inconspicuous sign (maybe it’s too high up, even for me), and dark windows that make it difficult to see in. The only thing you DO see is a too obvious “Now Open” sign that it looks like they got at the “Japanese Restaurant Supply Store”. Bottom line: I had seen the restaurant coming, but it had not scored very high on the “must try right away” scale.

But then I stepped inside, and I actually, audibly said “Whoa.” (That may also have been because they all started yelling hello at me in Japanese the minute I opened the door – I hate it when places do that.) Anyway, this place is designed to within an inch of its life. Downstairs, it’s all geometric shapes lined with neon in color, and a big cube over the corner of the bar showing music videos. (it’s less obnoxious and more cool than it sounds) Upstairs, it’s all white leather upholstery on the walls and Japanese greenery encased in what looks like resin between the booths. It definitely upps the “cool quotient”, especially for lunch places in the midst of the business district.

The food? More than competent, especially for it being just the first few days. The sushi was very fresh, the appetizers were interesting – shrimp in jalapeno sauce was especially good – and the bento box offerings were really good. In fact, the reality of the bento box was much more interesting than the menu description, which tended to be “chicken teriyaki” or “spicy tuna”. So that pleasantly surprised me.

So, if you’re looking to adventure somewhere out of the ordinary, but don’t want to get TOO down and dirty, Yxta is your place. And if you can’t go far, but you’re looking for something new, different, and interesting, then check out Octopus. (side note: Octopus is right across from Wokcano – wonder if they will both survive…)

And the adventure continues.

Keep your enthusiasm up, and happy travels.