My – and Your – New Favorite Bar

Y’all know that I am a fervent denizen of Downtown, and I continue to believe that Downtown is the most vibrant, alive area of this great City – sure, there might be a few dead zones, but there’s nowhere in this car-crazy city where you can walk (or even, gasp, cab) easily to such a variety of unique, inviting locations.

But “Downtown” is as much an aesthetic, a vibe, as it is a place.  Just like the beach connotes “laid back people who seem stoned and have more money than they look like they do”, the Westside connotes “overprivileged, overtanned, overdyed people who airkiss your front and stab your back” and Hollywood connotes “obnoxious bouncer standing by a velvet rope with a fake list in his hand while Westside girls (see  previous) offer questionable favors to gain entrance”, a Downtown-type place is somewhere unpretentious, that takes the quality of its spirits, food, and service seriously, where all are welcome (unless, of course, you exude Westsider or Hollywood attitude).

So that brings me to my new favorite bar in the City – a moniker I don’t bestow lightly.  No, it’s not Downtown in location (though it’s relatively close), but it’s certainly Downtown in vibe.  Ladies and gentlemen, I give you Harvard & Stone.

Brought to you by the gents behind La Descarga, Harvard & Stone is one of those places that just feels right.  But first, loyal readers of this little vanity project will know that I’m all about context – part of how a place feels is dictated by where it is, and sometimes the element of surprise is half the fun.  So first, take a gander of the location (thanks, Thirsty LA): 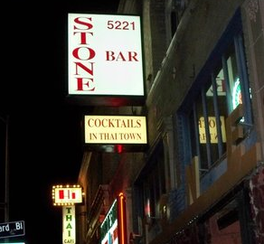 What?  This is my new favorite bar?  It’s located on Hollywood Blvd. at the intersection of Harvard, just east of Western (not coincidentally, just up the road from La Descarga).  It looks like this because it’s a reincarnation of a dive bar called the Stone Bar.  It’s not in “a neighborhood” – it’s just Hollywood Blvd., east of Western.  Luckily, they do have valet parking.  So you drive up, you kind of think “okaaaayyyyy”, you give your car to the guy, and you walk in an unmarked black door.  And you see this (thanks Thirsty LA and Eater LA!): 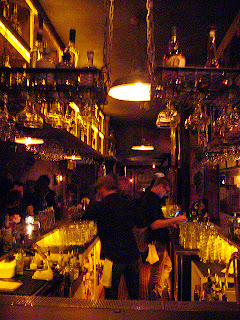 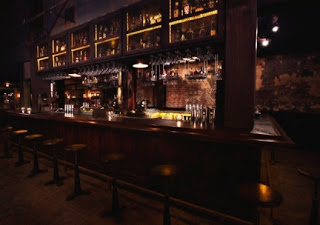 Unfortunately, these pictures don’t do it justice, but even with these, you can see that the contrast between the outside and inside is dramatic.

So why is this place my new favorite bar?  Besides its out of the way location, this is a place that gets it.  It’s a place that paid enough attention to the details to make it comfortable when you first step foot inside.  All burnt amber and cool light, it strikes the balance between urban and comfortable, between festive and “too loud.”  It’s hard to get a place like this right, and they did – from day one.

Second, great drinks.  Whether it’s the Hibisus Sour or Baby’s First Bourbon, they know how to good drinks – and you don’t wait 15 minutes for them.

But the feature that turns it from “just another cool bar” to “you have to keep coming back”?  The back bar.  The back bar will feature a different spirit each month – February (for the few days it was open in February) was bourbon, this month it’s gin.  But not only that, they will have a different bartender concocting a menu featuring that spirit every night, or just about (a la Test Kitchen).  I had an amazing drink called the Jigga Wha … Oaxaca? (naming drinks is an art unto itself) from the great bartendress Mia … that I’ll never have again.  Which is kind of a bummer, but makes me want to go back to see who else and what else they are doing.  The night I was there, Pablo Moix (who helped open the place) was excited about his upcoming night, because he was doing sophisticated, well balanced … jello shots.  No bar would put those on the menu, but for one night … why not?

This is the kind of place you walk in to check out, and find yourself closing it down.  It feels right, it looks right, it serves drinks right, it’s just done right.  Yes, you have to make a little bit of an effort to go there – i.e., it’s not around anything else.  But just try it – you won’t regret it.