Starting Off With a Bang

Hope you all had a good holiday and are enjoying these initial days of spring.

As I told you last week, I’ve made it my personal quest to have lunch at every Downtown dining establishment. Not every post will be on this subject, but since I started out somewhere pretty cool today, I figured I’d strike while the iron is hot.

It’s not so much the place I ate, though that was good too, as where it was: St. Vincent’s Court.

I’ve seen St. Vincent Jewelry Center on 7th Street for years – I’ve even shopped for and bought jewelry there. I’ve walked and driven down 7th Street countless, countless times. And I’ve never seen this unexpected slice of pedestrian allure. But there, behind the Jewelry Center, in an unassuming alley off of 7th between Hill & Broadway, is the charming, surprising St. Vincent’s Court.

The restaurants themselves seem relatively basic (and I’ll try them all). But the streetscaping is what’s so interesting. Check it out. 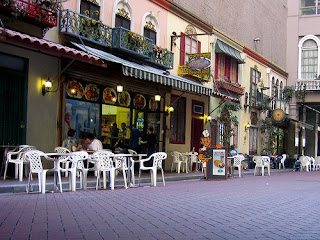 It’s like you’ve stumbled into this little Disneyfied slice of Downtown. Yes, it’s manufactured. Yes, the quality of the restaurants don’t seem to match what they’ve got going on outside. Yes, it makes Rick Caruso seem “authentic.” But you have to envision it: you’re walking down 7th St., leaving the hustle bustle of “business” Downtown, walking past Bottega Louie and Seven Grand, crossing Olive, crossing Hill, heading towards Broadway. Now, you’re heading into gritty Downtown. Into the Downtown with stores that sell every cell phone you can think of and have backpacks (or dresses or tacky T-shirts) framing the doorway so you can barely get in to the 100 sq. ft. shop tucked within.

You feel yourself – yes, even us urban hipsters and enthusiasts – getting your guard up just a bit. And then, through an arch on the north side of 7th, St. Vincent’s Court beckons you. (or, more accurately, doesn’t really beckon you because it’s so easy to miss). But when you walk through the arch, I won’t go so far as to say you feel “transported”, but you definitely feel a sense of wonderment. Like “what is this doing here?”

I’m not going to get too metaphysical on you, but walking in, I had one of my periodic “this is why I love Los Angeles” moments. It’s a city that can still surprise you. A city that rewards those who go searching for it, instead of expecting it to offer everything up to you on a platter. A city that you can mold into the city you want it to be, a city that works for you, instead of forcing you to conform yourself to it. More on that to come.

So, where did I eat? I ate at Farid, which at some point got named “Best Persian Restaurant” in Downtown News. And the food was more than serviceable. A nice chicken kabob with an even nicer kabob of filet mignon, a crisp salad, and, of course, Basmati rice. Topped off with some Armenian coffee afterwards. Its exterior isn’t as fancy as the others, and the interior is mostly just “comfortable”, but it wasn’t a disappointment, and the journey made it all worth it.

So there you have it. My maiden voyage into truly discovering what Downtown has to offer. Not a bad trip at all.

Remember: keep your enthusiasm up and happy travels!