Eating Outside the Box

I’ve been waiting to write a post about the best places to eat outside to take advantage of our enviable Southern California weather. But first, it was too cold, and then it immediately got hot, then it got too cold again, and now it’s hot. Where did spring go? Damn global warming.

Anyhow, it’s a little late, but here are a few ideas for those days when you look outside and say “I gotta get out of the office for a bit.” (I am currently looking enviously at people frolicking in the Bonaventure’s pool – which at least is less envy-producing than my old view of watching people frolic in the pool on the Standard rooftop.)

Sure, you could eat at the little tables they’ve thrown outside of the Daily Grill, or (better) on the patio at Zucca – and there’s always the option of grabbing something quick in California Plaza – but you’re looking for a place with a little pizzazz, or at least outside your usual orbit. Read on.

Look at the name and look at the location. Yes, it’s just as incongruous as you think it is. You drive down 7th, past the heart of Downtown, past the Broadway-to-Main gauntlet of cell phone shops and Latino shoppers, past Alameda (the de facto eastern edge of Downtown), and into the hard core industrial area – you know, the area where they just found, like, $3 million worth of pot being grown in a warehouse. And then, you see a red building with a white, unassuming sign: “The French Garden”. You pull into the parking lot with free valet (already a plus), and you walk into an unassuming gate at the *back* of the lot. And just then, voila – a french garden! I’m not even sure you CAN sit inside and, anyway, nobody does. I’m not going to say the food is out of this world, but it’s plenty good and it’s (mostly) authentically French, even if my waiter was Asian (gotta love LA). The atmosphere would be charming even if it wasn’t in such a random area, but the juxtaposition with its surroundings makes it even more fun. It makes for a fun lunch mini-adventure. 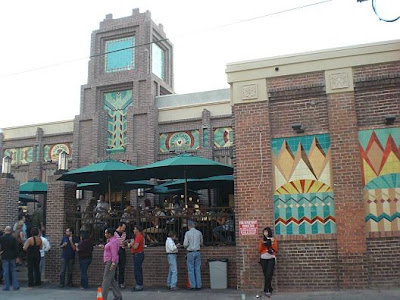 You know Urth Caffe, but you may not know THIS Urth Caffe. You drive down 4th and you cross Alameda and you’re searching for Hewitt St., and then you find it – is it really down this random little alley? Answer: yes, and it’s a little slice of Southern California, always pleasantly bustling, tucked into the Artists District. And it’s got enough umbrellas that you don’t have to sit under direct sun. The biggest drawback is that it can get very crowded, but it’s also pleasant to sit inside. AND, you can actually get pretty healthy food. 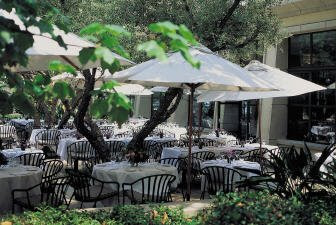 I know it’s not “off the beaten path”, but Cafe Pinot is one of those places that’s easy to forget about. It just sits there, next to the library, churning out great meal after great meal. Yes, it’s a little pricey … but on a nice summer day, underneath the umbrellas, drinking a glass of white wine, looking at the Maguire Gardens? Well, this is why you live in LA. And the fact that you’re Downtown makes it even better. 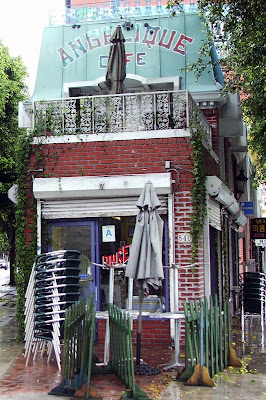 I know – most of you loyal readers are probably familiar with this place. But you may not think of it as a “nice summer day” place. Sure, you can sit at the tables they usually line along Main, but that’s not why it’s listed here. I don’t love this picture with all the stacked chairs in front, but it’s the one that shows the upstairs balcony most clearly – that’s where you want to sit. There are only about 4 tables up there, and if you get one of them, you’ll feel like you’ve snuck away to a little slice of Paris for lunch – suspended above the street, watching all the fashionistas walk by, and nobody to nose around into what you’re eating. If you eat there enough, maybe someday you’ll even say “We’ll always have Downtown LA.” 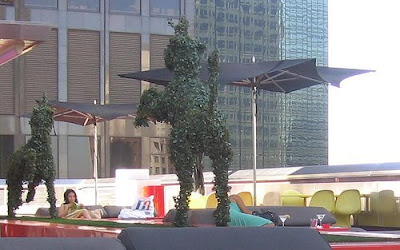 I’ve been extolling the virtues of the Standard at lunch for awhile, but haven’t heard of too many takers. See the picture at right? That’s about one more person than you usually see on the roof at the Standard at midday. You’ll get attentive service (rare at the Standard) and you’ll have the place to yourself. And on a beautiful summer day, indulge yourself with a mojito and maybe take a spin on one of the waterbeds. Why not? Nobody’s looking. 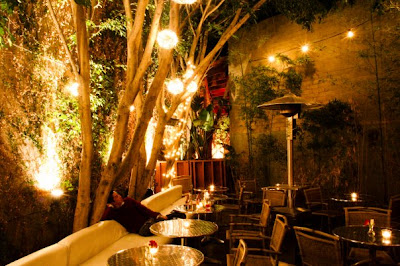 Sorry this is a nighttime picture, but you get the idea. Blue Dahlia is another hidden lunchtime gem. You walk in, and all you see is a counter and a couple of forlorn chairs. But walk around the counter to the right, and you find yourself in a delightful little patio with leaves gently falling, and maybe one other table with other people trying to escape the world. This is the ideal place to take that chick from Logistics when you don’t want anyone else from the office to know.

Well, this is hardly an exhaustive listing – Ciudad’s patio can also be quite nice, and we didn’t even touch the options at LA Live – but this blog is never comprehensive. I’m just trying to give you some ideas that you maybe haven’t heard of or jostle you into trying something you haven’t considered in awhile.

Hope you’re having a great, sunny summer, hope you have a great weekend, and happy travels.