As you know, I usually like to be out in front of the LA Times.  I had already planned my post for today, and was all excited to tell you about your newest Downtown destination, so imagine my depression when I saw it mentioned in today’s Food section.

But it was short, and certainly didn’t have your loyal Enthusiast’s flair.  So, for your dining and drinking consideration, I hereby give you: Mas Malo.

For those of you don’t know, Malo (apparently, it’s now Menos Malo) is a wildly popular Mexican food place in Silverlake.  Urban hip decor, cheap food, good drinks.  One of those places that’s cheaper than you think it’s going to be when you walk in (which is a good thing – i.e., it looks more expensive than it is).  The downside to Malo is that it’s too small, the parking is terrible, and it’s *really* loud.

Well, Mas Malo rectifies all that, or at least most of that.  It’s definitely not too small, parking is irrelevant, and, while it’s loud, it’s big enough to handle the noise – this is the kind of place that should be loud.

Mas Malo is in the space underneath Seven Grand, to the left as you walk in the front black gates, and it’s been “coming soon” for probably 2 years.  The wait was worth it.

The best thing Mas Malo has going for it is probably the design.  It’s a historic space, and it’s pretty close to breathtaking.

I took some pics, but Eater LA far outdid me, so I snagged a couple of theirs.  The top one is just a picture of the main space.  The middle one is of the upstairs lofty bar area.  And the bottom one is of a cool “secret” downstairs bar that has its own vibe. The downstairs bar isn’t open yet, but it looks amazing – it’s going to be a big hit when it does. 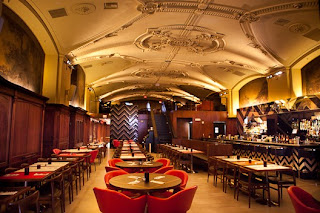 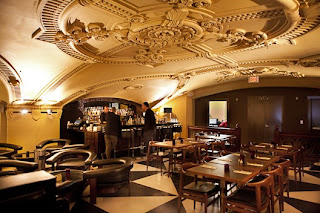 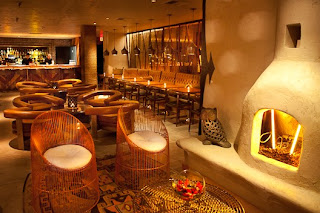 What does Mas Malo bring to Downtown?  I think Mas Malo fills a niche Downtown that Bottega Louie pioneered:  reasonably priced food in grand spaces that can serve many purposes.  Want to meet friends for a casual drink?  Great.  Want to take someone on a nice date?  That works, too.  Cool lunch place?  Got it.

Mas Malo wins hands down on the space – there’s no other restaurant like it in Downtown or really in the City of Los Angeles.  One thing the Times did say that I agree with is that it’s got a New York feel – one of those grand spaces that somehow makes the night feel more important.  It’s historic, but not stuffy, and feels like part of the urban fabric.

The food?  I’ve always thought Malo’s food was good if not necessarily great.  I’ll admit that it’s a little funny eating fairly casual (if still relatively creative) Mexican food in this big, vaulting historic space.  But what’s good about it is that you get to experience this big, vaulting space without emptying your bank account, and that’s a niche that Downtown was missing for a long time – nice but moderately priced restaurants.  That’s why I think Bottega Louie has been so popular, and I think its new neighbor will be just as popular.

Oh, and the cocktail program, largely imported from Malo and designed by some of top mixologists in the City, is top notch.  I think the bartenders are still learning a bit about execution, but they’ll get it down.  Plus, if you like tequila, Mas Malo’s got 230 of ’em.

So do yourself a favor and check it out.  It’s one of those places that can turn a random night out into an epic night out.