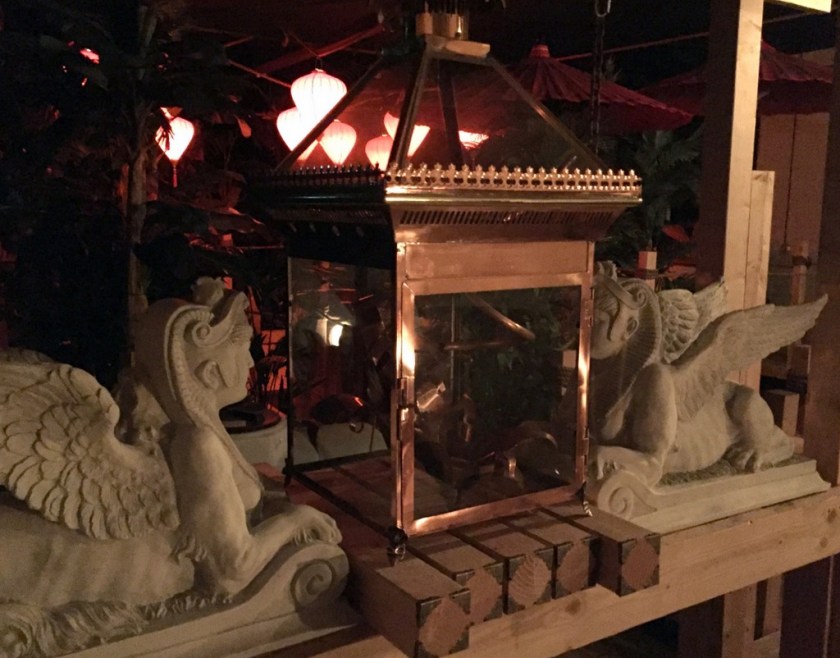 I know, I know.  It’s been too long.  It’s depressing when I continually hear “do you blog anymore?” because it reminds me how distracted I am by the actual job I have that allows me to blog.  Or at least allows me to eat and drink at the places I blog about.

AND, I have three different draft blog posts that will be so dated by the time I post them that the places I’m writing about will probably have closed.  Or you’ll all have been there already, which ruins at least part of the fun.  I know, I know – first world problems.

But all this means that when I DO post something, it usually means I’ve seen something I can’t NOT post about, and that I have to post about it as soon as humanly possible.  Yesterday, I saw such a place.

But, this place isn’t a restaurant.  It isn’t a bar.  It’s … a distillery.  Or maybe I should say a “distillery”.  Because I’ve been to many distilleries, in both Kentucky and Scotland, and I guarantee you that the world has never seen a distillery quite like this.  And, perhaps just as importantly, we have never tasted spirits quite like these.  How do I know?  Because the way they get made is actually patented.  More on that later.

My fellow enthusiasts, I encourage you – I implore you – to make your way to the Lost Spirits Distillery as soon as humanly possible.  Actually, I don’t know why I’m begging you.  The phrase “do yourself a favor” is used too much (probably even on this blog), but it couldn’t be more apt here.

First, I should tell you that you don’t have to be a spirits enthusiast to make this worthwhile.  Yes, they will give you some rum and some whisky the likes of which you have never tried (more on that below), but that’s just one part of a mind blowing experience you’ll find behind a relatively nondescript entrance in the Arts District.

Perhaps one indication of what you’re in for is that you can’t just walk in the front door and ask for a tasting.  You have to actually book a tour (via the website link above).  Which includes a fairly lengthy presentation about the chemistry behind what they are doing.  It’s 2 hours.  And it’s worth it.  (I got an abbreviated private tour, but I’m definitely coming back for the whole thing)

I should also probably tell you that I am a huge fan of “classic” Disneyland.  Jungle Cruise, Pirates of the Caribbean, all that. Why is this relevant?  Well, as owner/inventor/mad scientist/visionary/tinkerer/generally interesting guy Bryan Davis puts it, “you know the Pirates of the Caribbean ride?  The only problem with it is that you can’t get off the ride and drink with the pirates.  That’s what we’re trying to solve.” So … there’s more than one reason I like this place.

In many ways, I don’t really want to tell or show you more than that.  But, against my better judgment, I’m posting some pictures.  (all courtesy of Cocktail Wonk)

First, here are the stills.  And the container into which the distilled spirit comes out of the stills.

Bryan made all this himself.  As well as the copper distilling tanks.  Wait, what?  Somebody who makes his own stills and tanks?  And they look like this?  I told you – mad scientist.

And since I mentioned Pirates, here’s a picture of the boat.

Wait.  A boat?  Did I just say a boat?  Yes.  Your distillery tour will include a boat ride.  And first editions of H.G. Wells.  And talking computers.  And artifacts.  Oh, and the water you’re floating on is essentially the distillery’s cooling pond – the water used to cool the vapor coming out of those stills, which is what actually creates the spirit.

Here’s the room you’ll see when you first … walk in.  Or, when it gets revealed.  You’ll see.

Then, there’s this room.  The one with the first edition HG Wells on the table.  And various other leather bound oddities.  It looks better (and darker) in person:

Upon walking into this room (or, more accurately, being boated to this room), I asked “what, no shrunken heads?” And got a 5 minute explanation of how much they cost, how hard they are to get, and “well, given that they’re technically illegal, I didn’t want to freak out the inspectors.”  Meaning that Bryan had looked into acquiring actual shrunken heads.  Because of course he had.

This is simply like nowhere you’ve ever been and no place you’ve ever seen.  Is it manufactured?  Of course it is.  Is it a little bit Disney-fied?  Intentionally so.  But it draws you into an immersive, absolutely unique environment, and if you give over, drop your veil of cynicism, and let Bryan take you into his crazy, self-made vision, you’ll see what I mean.

Oh, and about those spirits.  Well, let’s go back a bit.  Bryan and his girlfriend, Joanne, were in Spain making absinthe when absinthe was illegal here.  In trying to figure out how to get it shipped into the U.S., they at some point realized that they had a terrible business model until … voila!  Absinthe was legalized in the U.S.  So, they rushed back and started selling what they were making, soon making fairly decent inroads into the U.S. market.

But as soon as sales of absinthe soared due to its newly found legality (and, no doubt, certain assumptions/hopes, though the legal version was never hallucinogenic), sales plummeted back to earth as most people said “interesting, but I don’t really like the taste of black licorice.”

So, because why not, Bryan and Joanne started screwing around with making their own whisky.  True to form, they malted their own barley, made/grew their own peat, and distilled their own spirit.  They started winning spirits competitions as much for their ingenuity as anything else.

Then, Bryan started playing around with rum.   Specifically, he got intrigued by whether you could speed up the aging process by messing with the wood and light and polymers and I’m not sure what else.  So he bought an old bottle of rum, got the chemical breakdown, and went to work – and lo and behold, he can now make a rum that looks and tastes like a 15-20 year old bottle … in one week.  Don’t believe me?  He just got a patent on the damn thing this March.  And the chemical composition is about exactly the same, as he will convincingly and thoroughly demonstrate to you.  The rum is strong … but it takes like nice, aged rum.

Now, back to that whisky.  The stuff he’s making now is called Abomination.  Why?  Because, as Bryan puts it, “rum is a beverage … whisky is a religion.”  So he wanted to admit right up front that he was screwing around with religion. For example, he added wood that had been used to age Reisling wine at some point in the process.  But wait, you, dear sophisticated reader, are saying to yourself: you don’t age Reisling in a barrel.  No matter.  Bryan did, then used that wood to age his spirit – again, in a week – and that somehow leads to a prematurely aged but delicious whisky.

I also should mention that he’s buying old chestnut furniture and stripping down the chestnut to age his spirit, instead of the usual oak, because that’s what they used to use in the olden days, and it imparts a different flavor profile.  He says a nice armoire gets you about two cases.

And finally, he’s now inventing and patenting a machine to capture and distill the angel’s share out of the whisky barrels.  This is already long enough, so I’m not going to explain what that means, but if you know what I’m talking about, you’re intrigued.

OK … you might read the above few paragraphs and think “what is he talking about?”  And the true answer is that I don’t really know, partly because I didn’t get the long chemistry presentation Bryan normally gives, and partly because when Bryan describes it to you, he starts speaking a different language.  One that I don’t speak.  But all you need to know is that whatever he’s doing, he makes spirits that are unique and, while perhaps an “abomination”, taste amazing.

(Side note of interest to my government/political friends:  One benefit to being a mad scientist/visionary/maybe-a-little-obsessive is that you do things like actually read zoning codes and entitlement processes.  So, with no professional help, Bryan figured out how to get this thing through every process you can think of .  Whether it was buying the correctly zoned building so he could open a distillery by right, figuring out that his “river” was one gallon below the limit to be considered a functioning water tank, or figuring out exactly what jurisdiction each inspector did and didn’t have and not being afraid to (successfully) call them on it … well, if this distillery thing doesn’t work out, he probably could have a side career as an expediter.  But I digress.)

So, I’ll stop now.  Yes, there are pictures above.  But you really have to see it – and experience it – to believe it.  (I hesitate to do this, but if you want to see much of this “in action”, there’s a video here.  But only watch it if you’re not convinced. It’s so much better to book your tour and experience it without knowing what’s in store).  So, again, book your tour to see this wonderland here.  Wait.  Did I mention the gift shop?  Speaking of Disney, walk in and say “wake up, Jose” and see what happens.