A new bar opened yesterday on 7th between Flower and Hope called Salvage.  Your loyal enthusiast had preexisting plans to meet up with a friend after work and, when the inevitable “you have a blog, where should we go?” question came up, I had my answer.

Loyal readers of this little vanity project will remember a recent post where I distinguished between people who are “foodies” and people, like me, who appreciate the total experience involved beyond simply whether the food (or drink or whatever) is any good – the sense of place, the quality of the service, the whole enchilada.  (Where did “the whole enchilada” come from anyway?  Why not “the whole tamale” or “the whole chile relleno”?  But I digress…)

I like Salvage’s design a lot.  Here are a couple pics – one from Eater, and the other taken by yours truly: 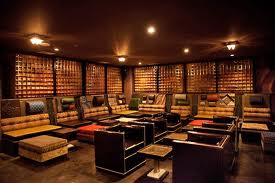 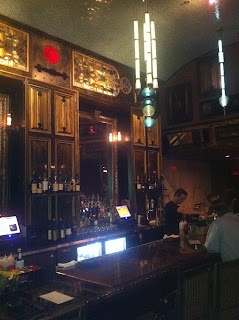 The decor is literally salvaged.  Old doors serve as the bar top, left over marble becomes tables, elevator doors as a ceiling, discarded tile over your head, stained glass embedded in the back of the bar, all custom designed and built for the space.  The interior definitely makes a statement.  Perhaps not quite an “oh, wow”  but definitely a “hey, cool.”

And the location is great.  Let’s face it, most of the cool bars in Downtown aren’t really in the heart of Downtwn.  Seven Grand, sure.  And if you count Public School 612, ok.  But other than that, you’re likely trekking a little bit from where you work.  7th between Flower and Hope is pretty much in the dead center of things, which makes it a great place to meet up.  (you’re not going by yourself, are you?)

So, cool design … great location … my hopes are definitely up.

Then, I sit at the bar.  Bartender is very cool.  Welcoming, friendly, on top of things.  Great – things are going well.  I ask for the drink menu.

The first drink listed is a pomegranate mojito.  Nothing wrong with pomegranate mojitos … but when a bar leads off with that, it doesn’t bode well for their drink program.  And, sure enough, there are a couple of “-tinis”, mostly vodka drinks, lots of drinks made with Veev Acai.  On top of that, the drinks weren’t that great.  I don’t think it was the bartender’s fault – I think he was taught to make weak, overly mixed drinks.

Now, don’t get me wrong – I am really not a cocktail snob.  (stop laughing – keep reading).  I just want places to be what they are.  Specialize in craft beers?  Great, I’ll order a beer.  Want to be a “shots and cosmos” place?  Fine, I’ll send my just-out-of-college friends.  But don’t give me your “cocktail menu”, and highlight fresh ingredients and whatnot, and then serve Veev and mojitos.  Also, I’ll admit that I’m biased by the fact that they are opening in Downtown, the hub of the cocktail renaissance in LA.  I’m not sure how you open a bar here without addressing that.  Most new places either go with it (Pattern) or consciously reject it (Spring St.).  But I’m afraid that Salvage is owned by people who didn’t really think of it one way or the other, and it shows.

Now, we’re a little hungry, so we order chicken potstickers, an ahi tuna appetizer, and some spicy chicken bites.  I don’t expect much out of bar food, and Salvage’s food tasted fine.  Nothing earth shattering, but it served its purpose.  Until I got home.  Then … well, let’s just say it wasn’t pretty, and I have an iron stomach.  And this morning, I wake up to an email from my friend saying “How does your stomach feel?  Mine was wrecked from last night.”  Again … uh oh.

So where does this leave me … and, where should it leave you?  Here’s my bottom line:

If you don’t really care about drink quality – if you’re happy with your vodka tonic or whatever – and you want a cool, centrally located place to go … then Salvage is for you.  I can’t say I recommend the food, but that could have been the first-night-blues – and there are lots of food options around there, so you don’t need to depend on them for that.  It’s got good-going-on-great design, the location can’t be beat, and it’s more about the company than the cocktails, right?  At least here, it has to be.

One final note: I went there early and I hear from a couple of different sources that the night crowd is pretty USC-student-centric.  I’ll let you make your own judgement about that.

P.S. – For those of you saw today’s LA Times Food section, you’ll see a big feature on John Sedlar. Just a couple weeks after my last blog post on Rivera/Playa. As I keep saying, at some point, it stops being coincidence…