My passion for Downtown continues unabated … but after a torrid period of exciting new restaurant and bar openings, things have calmed down somewhat.  Sure, new places still open every week, but many of them are now much smaller and more casual.  In the big picture, this is a good thing.  Downtown needed a chance to settle out a little bit, figure out what worked and what didn’t, let places mature and find themselves.  When too many places open too quickly, people chase the shiny new bauble, and forget about the amazing jewelry already in their collection.  Like any good relationship, we needed a chance to remind ourselves what made us love Downtown in the first place.

Case in point:  Seven Grand.  Seven Grand will always be the granddaddy of them all.  It’s literally where the cocktail movement began in Los Angeles, and virtually all of the original cocktail pioneers did a tour there at one point or another.  And for a long time, I was something of a fixture there – at one point, the bartenders started calling me the Norm of Seven Grand (which I was never sure how to take…).  But until recently, I hadn’t been there in months.  Why?  Because there was always a new place to try or something different to do.  And when I went back, I remembered why I love it.  The drinks were still great, the bartenders were still friendly and super talented, and the atmosphere was as inviting as ever.  It was like putting on that shirt hiding in the back of your closet that makes you think “This is a nice shirt.  Why don’t I ever wear it?”

But.  Just when you think that Downtown has plateaued, that most of the new openings will be smaller and low key, that we’ll simply have to keep appreciating our current quality restaurant and bar offerings, along comes something new that reminds you that ambition and creativity is still going strong in the heart of our great City.  A place that builds on what has come before, but is also something entirely new.  A place that quickens the pulse a bit and makes you think “Wow.”

Fellow Enthusiasts, I give you: Perch.

Located at the top of the Pershing Square Building, Perch is brought to you by the owners of The (late, lamented) Must, which is reopening at the bottom of the building in the next few months.  Until Perch, Downtown’s rooftop options consisted of The Standard and Elevate.  I won’t dwell on the shortcomings of each of these places here (poseur-y crowd, terrible drinks to start), but you go to those places more for the view than anything else.

Perch is something else entirely.  First of all, it’s a restaurant and bar in an actual structure built on top of the roof of the building (I’d love to hear the stories behind getting permitted for this).  I found a rendering which, while not a photo, gives the best sense for how it looks: 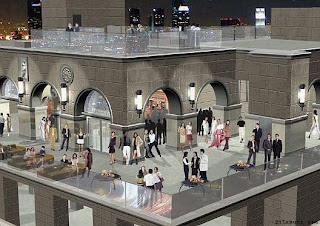 What makes this cool is that Perch really feels like 2 or 3 places in one.  If you sit inside, it feels a little bit like a European bistro.  Something like this (many of these pics are off PopSugar): 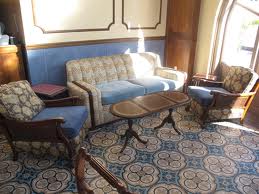 Sitting outside has its own great vibe: 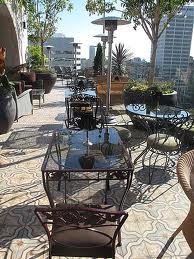 And one of the best views in Downtown: 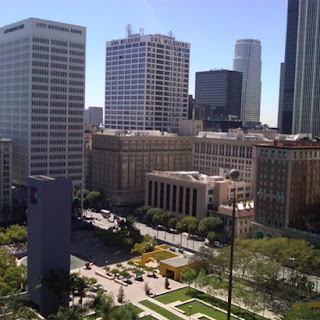 Or, you can sit around one of the firepits like we did and feel like you’re at a cool, laid back lounge: 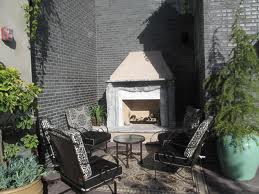 And the roof of the restaurant (the top of the box in the first photo above) has its own jewel box bar with 360 degree views and comfortable couches.  Plus, you can look down on the festivities, like this:  (resist the urge to pour a drink on someone)

The other thing I liked about Perch?  We went there on day two of its existence, and it was packed.  Plus, it was a little “scene-y” in the way that new, much buzzed about places get.  But everybody, from the doorman at the street level to the hostesses at the front to our somewhat frazzled waiter, was super friendly and accommodating.  The right way to approach the Downtown vibe, and unsurprising from the guys who created The Must – but still refreshing.

We went for lateish night drinks so, while Perch is actually a restaurant, I can’t vouch for the food (yet).  (Another virtue is that it feels as much like a lounge – an “elevated resting place”, in their marketing vernacular – as it does a restaurant, so you can go for any reason you want and feel comfortable).  I’ve heard mixed things about the food, and the drinks we had needed some work, but nobody can fairly judge a new place within the first couple months of opening, until they’ve had a chance to work out the kinks.  The bones of this place are just right, and The Must knew what it was doing, so I’m confident they’ll figure out the rest.

Perch is a rooftop place that actually has some sophistication and flair to it … and a reminder of Downtown at its best.  Now if it was only open for lunch…