The Virtues of Rebirth, Redux 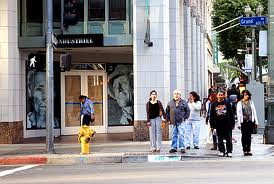 My last post discussed the virtues of rebirth, when the owners of an existing place recognize the benefits of reinventing themselves – it makes us wistful for the prior incarnation, but appreciate the fact that these kinds of decisions are what vitalizes and revitalizes Downtown.  And, they indicate that Downtown is worthy of that kind of reinvestment, which is a great signal for other business owners.

But sometimes, old places should just go away, and be reborn as something else, with new ownership and a whole new approach.  And sometimes, when you see what gets closed down and what opens in its place, it sends a whole different and, in many ways, even more exciting signal about the future of Downtown.

Some of you may remember the Carl’s Jr. at 6th & Grand.  Pretty shabby, usually had homeless guys out front, your basic rundown fast food place.  Now, there’s nothing wrong with Carl’s Jr. per se, other than the late Carl Karcher’s views on a woman’s right to choose as well as their really obnoxious, sexist commercials.  But I digress.  My point is, there’s a place for fast food joints in the urban fabric.  I would just rather have them not be on bustling, central, vital intersections like the one at 6th & Grand.

But guess what?  Carl’s closed.  Who knows why, and who cares?  The real question is, what goes in its place, and does it contribute to Downtown?  Does it stay closed, does it reopen as another ho hum place, or does it get reborn into something better, something worthy of its plum location?

I’m happy to report that the answer to the last question is a resounding yes, and for a whole number of reasons.  So the next time you’re anywhere near that neighborhood, hit Industriel.  (no website yet, so this links to an Eater write up).  Yes, the spelling is annoying and I don’t know how to say it.  Just “industrial”, or “industri-ehl”?  Either way, you’ll have to forgive the minor pretension in the name because this place is pretty great.  And it’s especially important to have “great” on such a pivotal intersection at this one.

The outside is a little deceptive.  See?

I know this is a tad small, but the signage and street frontage doesn’t necessarily scream “cool place inside.”  But when you walk in, you see that they’ve done ‘urban chic’ very well:

And this is just part of it – hard to find a picture that really does it justice.

Anyway, when you walk in the first time, it gives you one of those “huh.  this is cool” moments.

Now, loyal readers of this little vanity project know that one of the things I like about places is when they’re better than they have to be.  This is a smallish place.  They could certainly do basic food, and it would probably do fine.  And, on first read, the menu can look deceptively simple.  For instance, on my first visit, I got this:  “BUTTER LETTUCE, treviso, brussels, cauliflower, croutons, bottarga dressing.”  A salad.  After being told that “bottarga” is “fish roe dressing” (ummmm… okaaayyyy…), I ask whether the dressing can be on the side.  Politely, they say “not really.  It’s mixed in with the salad.”  My antenna goes up – where in LA can you not get dressing on the side?  But I go with it.  (another Enthusiast lesson:  sometimes, you just gotta say yes and go with it.)  Anyway, salad comes, and it’s fantastic – and, it totally makes sense why the dressing can’t be on the side, because it’s a perfectly dressed mix of lettuce and vegetables that comes together really nicely.

On a subsequent visit with friends, I ate half the menu, including a foie gras trio (RIP foie gras), black cod, organic rib eye, and gnocchi.  All interestingly prepared, all delicious.  Point being, this is serious yet approachable food, in a very Downtown-centric environment.

Anyway, back to my first trip there.  On the way out, I see stairs.  Whenever I see stairs, I go up them to check it out (assuming there’s no rope, and sometimes even when there is).  Lo and behold, an even cooler, loft-y bar/lounge area.  It looks like this:

(sorry the pics are small.  that’s what happens when you save them off websites).  Anyway, you’ll just have to trust me. It’s loft-y, lounge-y cool.  And the drinks are awesome, too – part of the new wave of places doing “mixology” without being all “mixology” about it.  Plus, you gotta love a good drink name, and whether it’s the Shake Weight, the Van Gogh’s Ear, or the Pouty Little French Girl, you’ll have as much fun ordering these drinks as you will drinking them.

So good riddance Carl’s Jr.  Sometimes, we don’t want reinvention.  We just want replacement.  Here’s hoping Industriel is with us for a long time.  But maybe they can reinvent themselves a tiny bit by spelling it right.