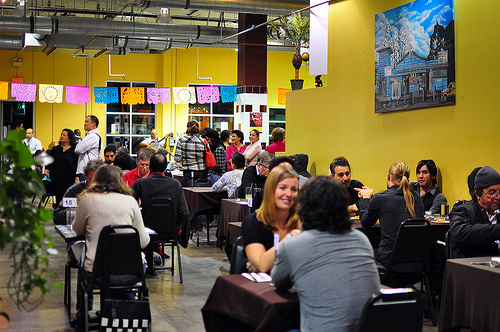 Well, one of my enthusiast-olutions was to write about newer places sooner, even if it meant fewer bells and whistles.  So … here goes.

And … showing the difficulty of that, I wrote the line above 4 weeks ago, and am only now getting around to finishing this.  As I’ve said many times, if being the Amateur Enthusiast paid the rent, then I wouldn’t have this problem.

Anyway, I continue to marvel at 7th Street.  It’s really become/becoming the restaurant row of Downtown, and two new places as well as one not-so-new-but-still-newish place proves it.

Let’s start with the “you probably already know about it place” – Mo Chica.  Mo Chica started as basically a food stall by a chef named Ricardo Zarate inside Mercado la Paloma (which, if you haven’t been, is worth the trek down Grand).  After Jonathan Gold put Zarate on the map with one of his typical “how did you find food this good in this spot?” reviews, he was set.  Eventually, he moved into a real, actual restaurant space on 7th, just up the street from Bottega Louie.  It looks like this, inside and out (thanks, Eater):

It’s festive, it’s Peruvian, and it’s like nothing else in Downtown – or really, the whole city for that matter.  There’s a reason that, in just short two years after that seminal Weekly review, Zarate was named one of the country’s  Best New Chefs by Food & Wine.  It also happens to be (relatively) cheap and (relatively) quick, which I always appreciate in a sit down place.

Now, to a place that you may not know about quite yet, but is worth a mention.  Directly across Grand Avenue from Bottega Louie is the very new, very French Coco Laurent.  If I’m being honest, I think Coco still has a few kinks to work out.  The first time I went, the service was so bad that they comped lunch for 3 people AND gave us a free lunch certificate (but at least they did that), and the other times I’ve been there, the food has been hit and miss.  BUT, the setting is pretty nice (here are a couple pics, inside and out):

The inside pic is kind of hard to see, but it’s basically got a throwback vibe that makes you feel like you’re in some mix between a historic Downtown store space and a glorified French bistro.   And when the food has been on, it’s been good – and has gotten more consistent recently.  It’s sorta like Bottega in the sense that it’s good for everything from date night to drinks with friends to a decent lunch.  And, for what it’s worth, it’s got a very respectable cocktail program. Definitely a welcome addition to that intersection.

Speaking of that intersection, our final entry is one that I bet many of you have missed, yet has been there in one form or another for longer than the rest of them.  Guild Restaurant is in the space of the late, lamented Pasta Primavera directly across 7th street from Coco.  When PP closed, the current owners snapped it up and opened CityBilly, which didn’t work – too casual (plus, um, that name).  But it’s a great location, so the same owners reopened it as Guild.  Guild doesn’t have big names behind it, and doesn’t have a gimmick … so it hasn’t gotten much attention, even though it’s been open since July.  But … it’s really good.  And certainly way better than it has to be, which loyal readers of this little vanity project know that I appreciate.  Here’s what it looks like (sorry the pic is big and weirdly placed – blame WordPress):

That thing on the right is a cool chalkboard mural (hand drawn, for those of you who are interested, by Justin Pike of Tasting Kitchen cocktail fame.  If you don’t know who that is or what that means, move along…)

Anyway, nothing earth shattering in terms of decor or menu items, yet it just does things well.  The burger is amazing.  The spicy ratatouille is really good.  Even the farro salad, which I usually don’t love, has a lot of flavor.

It’s perhaps a sign of the new Downtown that a place like Guild that just serves good food in a comfortable setting would struggle to find its footing.  I love the name chefs and the soaring spaces as much as the next person … but I want simple, straightforward places like this to succeed also.  So … go!

OK.  No frills.  No “big ideas”.  Just a few more places to put on your list.  More to come, hopefully soon.