I know – you don’t hear from me for months, and now the hits just keep on coming.  But when stuff happens that I feel like y’all would want to know about, your loyal Enthusiast can’t tamp down the enthusiasm.

I’m not sure what it is about Pasadena these days, but all of a sudden, places that were dependable in their stodginess are trying to reinvent themselves a little bit.  You read last week about the Langham, and now it’s the Raymond, another dyed-in-the-wool “place you take your parents for brunch”. It’s a great little cottage tucked away off of Fair Oaks, and certainly has charm … but the average age of the clientele is in the mid-dozens.

Enter cocktalian extraordinaires Aidan Demarest and Marcos Tello.  You all know Aidan from Seven Grand, The Edison, and now First and Hope.  And Marcos is L.A.’s very own celebrity bartender (still pulling down a couple shifts a week at The Varnish – catch him while he’s still making drinks for us regular people).  When I first heard that Aidan & Marcos were being hired to revamp the cocktail program at The Raymond, I will be honest – I wasn’t sure I got it.  How were their cool, urban sensibilities going to mesh with The Raymond’s suburban old Pasadena vibe?  In coarser terms, were they (the Raymond) simply trying to slap lipstick on a pig?

Well, last night, the newly christened 1886 had its debut.  And I kicked myself for ever doubting any of it.  I knew the drinks would be amazing, but the design is great, it’s accessible by a separate back entrance, and it all feels very pre-Prohibition, just like they wanted.  It’s got stamped copper ceilings, all sorts of period detail, an inviting outdoor area, and a great bar area.  If this place was Downtown, it would have to compete with the Varnish or Cana for the whole “speakeasy” vibe … but it’s not.  It’s in Pasasdena.  At The Raymond.  There’s nothing like it around for literally miles.

Now, for those of you who pay attention to Urban Daddy, you’ll recall that they sent an email about 1886 on Monday.  (I hate being scooped, even if it is by a well known national email publication).  But did they tell you much about the drinks?  Did they show you more than one small photo?  No – just some snarky commentary about Pasadena and Golden Globe winners or something.

So here you have it.  Self taken pictures so you can feel like you were practically there:

Generic crowd shot.  A little dark, but you get the flavor: 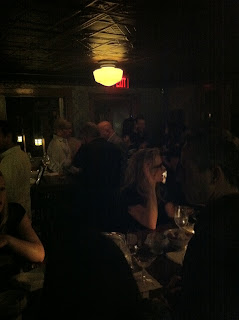 Cool bar shot.  Note the stillness mixed with the blurred action in the background – exactly how bars usually are. 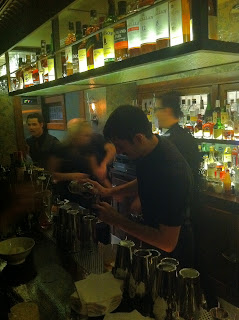 Detail shot of a cuckoo clock right by the bar.  There’s also a really neat old phone on the wall, but I couldn’t get that one to come out. 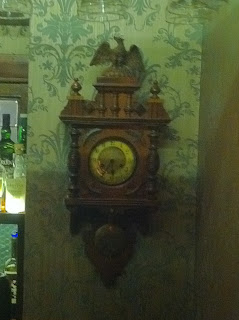 One of the detailed punch bowls: 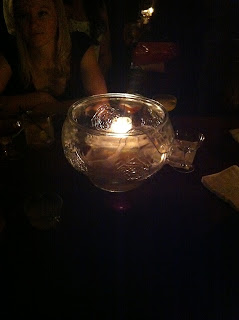 The drinks are nothing short of incredible.  Way more unique than you expect from a place going for “pre-Prohibition”, with a lot of in-house infusions, homemade syrups, and interesting flavors.  The Honey Nut Old Fashioned uses peanut-infused bourbon, and it really tastes like a honey nut cocktail.  La Primavera has mezcal, white vermouth, and amaro – I would have never imagined that combination working, but it was one of my favorites.  And the Wall Paper Cocktail has cachaca, vanilla syrup, and jalapenos – and for those of you reading that and saying “I’ll pass”, you haven’t tried it.  The sweetness and spiciness play off each other really well.  (and just to answer a question in advance that I get a lot, I TASTE these drinks.  I don’t have one of each…)

I should also say a word about the food.  They were passing around some grilled cheese sandwiches that I’m still dreaming about, they had crab crostinis on a silver spoon with a delicious vinaigrette, and other finger foods that I couldn’t get enough of.  If that was a sample of the rebooted kitchen, then the Raymond is going to have something good going pretty quick.

So that’s my report.  Remarkably, there are now *two* decent places to go out in Pasadena, and only one of them has amazing drinks, great design, seemingly great food, and that inviting, near-illicit vibe that you want in a dark cocktail bar.  So do yourself a favor, make a field trip, and check it out.  You can pretend that you’re Nucky Thompson planning your next shipment of Prohibition hooch.