For Those Who Think Rivera Is (committing heresy here) Overrated

As you all know, I like to celebrate the best of Downtown – and there’s a lot to celebrate.  I don’t make a habit of going negative on places for the simple fact that a rising tide lifts all boats – I think Big Wang’s and ESPN Zone are just as important to the future of Downtown as WP 24 and Church and State.

That being said, I think it’s fair to point out when places, while good, get a little overhyped.  Which brings me to Rivera.  And by “a little”, I mean “way”.  John Sedlar, Rivera’s chef and owner, was one of the first chefs to bring a fine dining approach to Latin and Southwest cuisine back in the ’80s and early ’90s with a trio of very well received restaurants (starting in Manhattan Beach of all places), which put him near and dear to the hearts of food critics.  He then sold his restaurants and went into the book and dish business for 15 years or so, until he returned to restaurants with Rivera a few years back.  I bring this up because I believe this is partly to blame for the level of hype that Rivera receives – it’s like your grandmother’s apple pie (or pan dulce or whatever – just go with me here).  You remember it with such fondness, especially when you haven’t had it for awhile, until you swear it’s the best apple pie anyone has ever made.

But I feel like the friend who gets invited over to try this amazing apple pie, except I’ve never had it before, so my palate is more, shall we say, trustworthy … and, while remaining polite, inside I’m going “it’s just apple pie.”

That’s a little how I feel about Rivera, with more nuance involved.  Rivera has gotten the rare and coveted 4 stars from the LA Times (I think only matched by Providence and the Bazaar locally), and I can’t tell you how many times a non-Downtowner asks me if I’ve been to the one restaurant they’ve heard of Downtown: Rivera.  And I do respect the ambition and craft that goes into Rivera.  The design is incredible, and the audacity to have 3 or sometimes even 4 menus running in the same restaurant is admirable.  Sedlar clearly has creativity to spare, and consciously pushes the envelope with his cuisine.  And, near to my heart, Julian Cox’s cocktail program is nearly unrivaled (in fact, I frequently recommend that people go for cocktails and then simply snack at the bar).

But if I’m being honest, I find Rivera hit or miss on the execution front.  Certain dishes I remember to this day, like the tamarind and agaze glazed black cod which this non-fish-lover couldn’t get enough of.  And the peppers stuffed with chorizo, raisins, and gruyere are rich and decadent and amazing.  But then I get to things like deconstructed salsa.  I don’t want to have to construct my salsa.  The banana leaf wrapped pork shoulder is unremarkable, and the rib eye filet with chimichurri, while having nothing wrong with it, is just … steak with chimichurri sauce.  The point is, while much about Rivera is really great, there’s plenty else which is just OK and, at their price point, it’s fair to want more consistent greatness.

So … what if you like what’s good about Rivera, but want more consistency?  What if, while you appreciate Rivera’s ambition, you’d take a little less ambition for a little more consistent execution?  For that, I give you Sedlar’s other restaurant in LA: Playa.

Admittedly, I’m a little late to the Playa party.  It opened 6 months ago but hey, if something isn’t Downtown, I usually don’t race to it.  So for all you hipsters trying to be cooler than me, I get it: you’ve already been there.  Good for you.

Playa is located in the former Grace space on Beverly Boulevard, between La Brea and Fairfax.  It looks like this on the outside (courtesy of kevineats.com – sorry it’s a little blurry):

And it looks like this on the inside (from a blog by someone named Connie McCreight – people get cranky when I don’t credit them.  Again, a little blurry due to size): 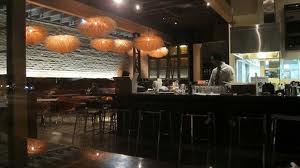 The food at Playa is consistently pretty great.  And, while it doesn’t aim as high as Rivera, it’s not exactly serving two tacos with a side of guacamole.  They have a Thai Tamalli with fresh corn masa, shrimp, basil, mint, cilantro, lemongrass, thai chiles, and ginger-garlic salsa that’s amazing.  They’ve got an array of maize cakes which were delicious.  The arepas with wood grilled shrimp, mango, and chiles was just the right mix of spicy and sweet.  And the chili rubbed pork tenderloin was incredible.

And Julian Cox has developed a cocktail program right up there with Rivera’s – I had The Swarm, which included Reposado Tequila, mango, sherry, lime … as well as bee pollen, douglas fir, and something called hellfire bitters in it.  Before you wrinkle your nose, trust me – it was delicious.  (what does your loyal enthusiast always tell you about being open to new things?)

So for those of you who generally like Rivera’s cuisine, but don’t want to pay sky high prices for hit and miss dishes that leave you hungry when you’re done, try Playa.  Somewhat (but only somewhat) lower ambition, but consistently better execution – I’ll take that every time.