This blog post will contain an actual restaurant review, or something close to it.  What? you say.  Don’t you always review restaurants?  Well, no.  Actually not.

As a result of this little vanity project, I frequently get referred to as a “foodie”.  Another thing I hear a lot is that I write a blog where I “review restaurants and bars Downtown.”  While neither of these things is wholly inaccurate, neither of them are entirely accurate either.  A “restaurant” (quotes to be explained later) I went to recently helped me clarify all this in my head, so let’s clear it up together, shall we?

First, let’s address the “foodie” question.  Don’t get me wrong:  I love good food, and I love good restaurants.  But “foodie” connotes something else entirely, something farther down the rabbit hole.  “Foodie” is usually used to refer to someone who really seeks out obscure or unique food opportunities – and I use the word “food” instead of “restaurant” deliberately.  A “foodie” is someone who will wax rhapsodic about the most amazing chanterelle mushrooms they had the other night, or can’t wait until white truffles come into season.  “Foodies” take – and post – pictures of their food.  I don’t do that.  I do love good food … but what I think I like even more is the *experience* of good food.  The whole dining experience, of which food is really just a part.

Which leads me to the second misnomer – that I “review” restaurants.  If you read closely, I really don’t.  What I do is tell you about places that I like and think you might like, too.   You’ll notice that I usually don’t provide too many qualitative judgments.  I more frequently say “if you like a certain kind of thing, then I think you’ll like this place.”  And even when I do really advocate for someplace, I try to tell you *why* I like it, and what you can expect – because maybe it’s not your kind of place.  And places I don’t like?  I don’t write about them.  I have gone and tried places specifically for the purposes of blogging about them that, after a subpar experience, I have declined to write about.  I just don’t think it’s worth it, and it’s not the reason I do this.  I do this to celebrate Downtown, Los Angeles, good restaurants, and good bars.  Which is what I try to do.

But today, I’m breaking the mold a little bit.  I am actually reviewing Ludobites 007, the seventh iteration of the ‘pop up’ restaurant that quasi-famous chef Ludo Lefebvre and his wife, Kristy, set up every few months in a different location.  But before I get to the actual review (and a better explanation of a ‘pop up’ restaurant for the uninitiated), let me tell you why I’m reviewing it.

I’m reviewing the food at Ludobites because it begs to be reviewed.

What do I mean?   Well, now’s where the explanation of the pop up restaurant becomes relevant.  Ludo was formerly the Executive Chef at L’Orangerie and then Bastide, both fine dining temples (L’Orangerie is closed and Bastide has a long and tortured history, but that’s all ultimately irrelevant here).  He has been on Top Chef Masters, Iron Chef America, has been named one of the 50 Best Chefs in the World, etc. etc..  In short, he could easily own and run a restaurant.  But he doesn’t.  He finds a space that works for him – usually a restaurant that isn’t open for dinner – and takes it over at night for limited periods of time.  He announces a time when reservations will begin to be taken and, because of the scarcity principle as much as anything else, all of the spots for an entire 4-6 week run go within hours of being available, and usually crash Open Table with the crush of people trying to get on simultaneously.

Right now, he’s at Gram & Papa’s, a space he’s used previously.  Gram & Papa’s is a sandwich place (by day) at 227 East 9th Street, just east of Los Angeles Street, really at the edge of the Fashion District.  It looks like this: 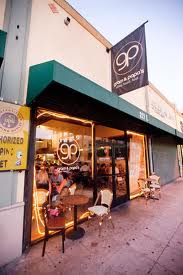 Aside from a fairly modest sign in the window, Ludo doesn’t change it much. You walk in, that day’s sandwich specials are still on the chalkboard, you’re led to an unadorned table with basic cutlery, and you’re given a one-day-only menu.  They don’t sell alcohol, though you can bring your own wine as long as you don’t set it on the table (strange, but that’s the way it is).  They give you very small water glasses, and you cork and pour your own.

In short, this restaurant experience, such as it is, is about nothing but the food.  The servers are competent enough (though ours was pretty annoying), but you can’t exactly get great service by only hiring people 4 weeks at a time.  The design doesn’t match the food because how could it?  You go here because you want a great meal, and you don’t care about anything else.  Also, because of the nature of the place, the food is mostly tapas style, or at least family style.  It’s not really a place where you decide what you want and order it.  You sort of order everything, or mostly everything, and then share.  And by the way, when you go somewhere that’s known as a place where “foodies” go and where you really can’t substitute, you have to expect that the chef is going to do some weird stuff, because a) he doesn’t have to worry about pleasing a “general” audience and b) he doesn’t have to sell the stuff consistently over time.  Which was certainly the case here.

So was it a great meal?  Certain *dishes* were great, but as a whole, for me, it didn’t add up.  There’s a reason why Jonathan Gold, the only writer to win a Pulitzer for food writing – and who happened to be there the night we were there – has frequently given Ludo one of his “dishes” of the year.  Because this is a hit and miss proposition.  Certain things that I expected to be questionable were actually great, like Tandoori Octopus, and something called “Compressed Pig’s Head with Cheddar”, which really should have been called Pate with Cheese Wafers because it wasn’t gross at all and, once you got over the name, it tasted great.  (and it’s not pig’s “head” – it’s pig cheek.  Important difference, as far as I’m concerned.)  The Salt Cod Panna Cotta and the Egg with Sea Urchin and Caviar were also really excellent.  On the other hand, things like “Roasted Beef” (really?  “roasted” instead of just Roast Beef?), the onion tart, and the escabeche mackerel were disappointing.  And the Foie Gras Ravioli with Black Truffle Sauce was almost a joke of obscenely “rich on rich” that didn’t ultimately work.

But the reason it didn’t work was more than that for me.  I really *wanted* to like it.  I love that he has embraced an obscure part of Downtown and drawn people there, even if they usually only see it fairly deserted at night.  I’m all for anything that gets people out of their Westside cocoon.  And I love the “idea” of it.  But the idea and the reality, as is so often the case, are two very different things.

The reason it didn’t all come together for me brings me back to my original point – that I’m not really a “foodie”.  If you had to call me something, call me a “placie” (“placeie”?  “place-ie”?).  You’ll notice that I raved about Perch without trying the food and only trying one or two drinks – and the drinks were subpar at that (though, like I said, they were on day two of their existence).  I suggested you try Spice Table for lunch, when it really just serves sandwiches (though they are good sandwiches).  But the reason I suggested these venues, and the reason I have suggested many others, is that they have a tremendous sense of “place”.  They draw you in, make you feel part of something interesting, give you a definite “vibe”.  And I think those elements, more than food or drink quality – though that’s obviously not unimportant – is what has made so many Downtown establishments so great.

Put another way, at least for me, great design, great service, and a great experience can make up for just serviceable food and drink.  Bottega Louie?  Mas Malo?  First & Hope?  All places that – don’t get me wrong – have perfectly fine food, but it’s the design and the vibe and the whole experience beyond the food that add up to great, or borderline great.  But the food would have to be consistently, superbly amazing to make up for the lack of anything else that makes for a great dining experience.  Yes, I would eat French Laundry food inside Gram & Papa’s and be happy about it.  But hit or miss dishes that try harder than they need to, seem overly showy, and stretch a length too far in trying to be foodie-cool?    Not for me.

See?  Even my reviews say so much more than just a review.