The Best Restaurant You’re Not Eating At 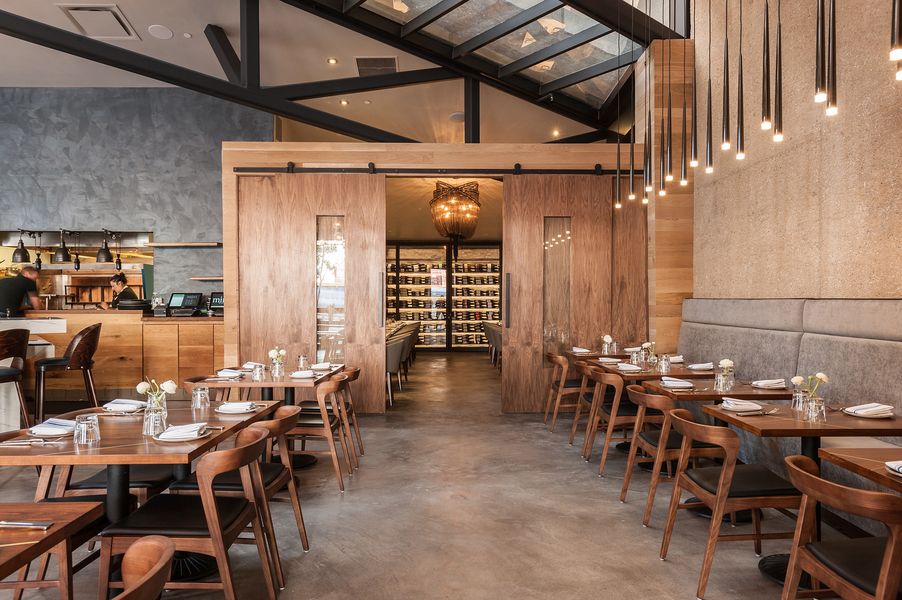 Someday, someone will have to explain to me how our internal radar works.  Because the most random things can get “on our radar”, and then something that totally SHOULD be on our radar somehow doesn’t get there.  I mean, I read a number of food blogs.  I follow many food and restaurant-related Twitter feeds.  I follow Downtown pretty closely.  I usually know and get excited about places well before they open.  So, it’s not often when I stumble on somewhere that’s already *been* open for a couple of months and go ‘uh, how did I not really know about this place?’

To be fair, I mean, I KNEW about the place.  It’s on Wilshire & Figueroa.  I walk by it all the time.  But I just didn’t … care … about it.  Part of it is that the smattering of articles with the gist of “hey, a cool new place is opening Downtown” came out when I was out of town (I checked).  I also think a part of it is the space.  This place is in the old Cucina Rustica space – an utterly unremarkable and overpriced Italian place that lasted for a year or two and then closed.  And the new place looked like it was kinda Italian.  So I think I just thought “eh, another random Italian place.”

Before you think not another Italian place! (see my last post), you shouldn’t.  First, because Italian food is awesome and there can never be too much of it.  But also, this place, while offering a good selection of pastas and pizzas, has lots of influences from Mediterranean to good old American comfort food.  And besides, a good restaurant is a good restaurant, and this place is a good restaurant.

As usual, I start with the space.  Open, airy, inviting, and beautiful.  Take a look:

It’s the right kind of space for that central, busy intersection.  It’s welcoming and upscale without being too fancy or overproduced.

And then they get the food part just right.  It’s a tricky balance, being in the Financial District.  You have to be nice enough to attract the lawyers and bankers and generally Financial District types who populate the area, but you can’t be too “foodie” or else people won’t go there regularly – it will seem too “special occasion”.  And you can tell they’re trying for that – that’s why the lunch menu has grilled octopus and bacalao and potato croquettes with piri piri sauce … and spaghetti Bolognese and a grass fed burger.  But the Bolognese sauce takes them 8 hours to make and they make the bacon that goes on the burger in house.

That’s why I really appreciate about places like this.  When they try hard and take it seriously, but don’t throw it in your face.  It’s just really good, and you don’t necessarily need to know why.  I mean, they go to four farmers markets a week to pick up their produce, but that’s not on the menu.  I only know about the Bolognese sauce because the waiter mentioned it offhandedly when we ordered it.  The pastas are home made and even the salads are ridiculously fresh, but they just come that way.  There’s not some pretentious statement on the menu, and the descriptions of each item aren’t a paragraph long.  Just a simple list of what comes with the dish.  What you may not know is that any particular ingredient may have been poached for a couple hours or marinated for three days or whatever.  It’s just how they do things.

Maybe that’s why this place hasn’t gotten a ton of “restaurant of the moment” foodie press.  Maybe it’s one step *too* approachable for the average critic.  I mean, the menu is really diverse – yes, it has pastas and margherita pizza and a burger, but it also as plenty of critic bait like lamb tagine, grilled sweetbreads, and Portuguese shellfish stew.  Or maybe they need a mission statement or paragraph long menu descriptions. Yet, beyond the opening week press a couple months ago, there hasn’t been much press since.  Anyway, whatever it is, Miro is sort of flying under the radar (there’s that radar again), and it shouldn’t be.  (of course, I’m sure Jonathan Gold will review it right after I post this…)

(Side note: speaking of approachable, why doesn’t anybody serve banoffie pie for dessert?  It’s ubiquitous in Scotland, and it’s basically a mash up of bananas, graham cracker, caramel, and chocolate.  It can be a pie, a pudding, a mush of stuff in a jar, whatever, and it’s always delicious.  But nobody anywhere serves it ever here.  Anyway. I digress.)

Oh, and wait.  How did I get this far and not mention the whiskey bar downstairs?  There is a whiskey bar downstairs.  A real, actual, good, “like, they’re really serious” whiskey bar downstairs.  I mean, not in an offputting “you have to know whiskey” way.  But in an “I’m in a cool speakeasy-ish bar with cool stuff to try” way.  (and with that, there will be no more quotation marks in this post).  AND, they pour in 1 or 2 oz. portions, so you can sample a few without stumbling out.  Yes, the menu is 100 pages and hardbound, but don’t let that intimidate you – you can also just ask the bartender (which is *always* a good choice, at least at a good bar).

See?  Cool, right?  The picture above is the whiskey bar.  It just pours whiskey and scotch – no mixed drinks (but you should still try it!  Promise! For those of you who have been to Bar Jackalope at the back of Seven Grand, it’s sorta like that – it just opens earlier)

However, you will walk through the main bar – smaller pic to the right – which is also cool and will serve you whatever you want.  What I really like about Miro overall is that they have an actual, separate bar that exists on its own terms.  It’s not really “mostly” a restaurant or “mostly” a bar.  It’s either and it’s both.

So, all in all, they’ve managed to pair a very good restaurant with a very cool bar (really, two cool bars), and that’s pretty rare in Downtown, actually.  Of course, the driving forces behind this gem come from Faith & Flower, which is *also* a great restaurant AND a great bar with really high quality everything.  Which means it’s got good lineage.

So.  Good food.  Good space.  Great bar.  Centrally located.  Why haven’t you been yet?  Put it on your radar.