LeKa and Towne: Is A Great Space Enough? 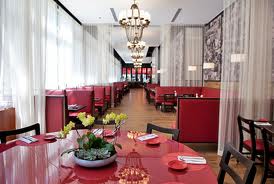 I blame Perch.  Well, perhaps “blame” is too strong a word.  But, Perch is something of a precursor to two recently opened restaurants that I am struggling with.  Let me explain.

Perch is a great space.  An amazing space.  Among the best spaces in all of Downtown.  And, when it first opened, I raved about it.  But I said something that, in retrospect, was telling:  “I’ve heard mixed things about the food, and the drinks we had needed some work, but nobody can fairly judge a new place within the first couple months of opening, until they’ve had a chance to work out the kinks.”  That post was in August 2011.

Well, it’s been over a year now, and that part of it hasn’t really changed.  While Perch is still thronged, and I still go regularly, I don’t think anyone is really going for the food or, for that matter, the drinks.  Don’t get me wrong – there’s nothing “wrong” with what they offer.  It’s just not what draws people there.  We did recently have a surprisingly good Sunday brunch there, but that’s the problem – we were surprised by how good it was.  Loyal readers of this little vanity project will know that I frequently extol places that are “better than they have to be.”  Well, Perch is only as good as it absolutely has to be, and no better.

But, that being said, they’re doing great.  As I said, thronged every night.  So, from a business perspective, why would you invest in better food or drinks when your customer base isn’t demanding it?

This, I think, is what might be happening with two new restaurants in Downtown:  Towne, which is relatively new, and LeKa, which is brand spanking new (grand opening tonight).  I’ll start with Towne.

There’s no doubt it:  Towne, on the corner of 9th & Flower, just across from the Ralphs, is a grand space.  Just a shade on the corporate side, but definitely exudes something of a wow factor.  Here are the de rigeur, “borrowed from the Internet” pictures (sorry they’re squished together.  Couldn’t figure out how to fix that):

Before I go on, one short detour.  From a Downtown redevelopment perspective, Towne is amazing. It wasn’t that long ago that the opening of a restaurant like Towne would have been a Major Event.  I mean, the opening of Pete’s was major, and it’s probably half the size of Towne.  Not only is Towne a huge, statement-like space, but it’s also on the corner of 9th & Flower which, again, not too long ago would have been seen as “pioneering” in a questionable neighborhood.  Now, it’s “just another restaurant.”  On a corner that’s fine – perhaps a tad south of central Downtown, but certainly not in the hinterlands (thanks in no small part to Staples Center and LA Live, helping serve as a southern anchor).  I’m sure the owners of Towne would probably like a little more hype, but in the scheme of things, it’s a sign of maturity that a restaurant like Towne would open, and Downtown would casually just start going there.

But, back to my little thesis here.  I’ve been to Towne quite a few times, and struggled with what to say about it.  There isn’t anything wrong with it – quite the contrary.  I direct people there frequently, as a new, big, inviting place.  And I’ve felt like I’ve wanted to write about it because, well, it’s a new, big, inviting place.  But I’ve just not been sure what to actually say.  The food is fine.  Actually somewhat creative.  But there’s nothing I’ve had yet that makes me want to tell someone they have to try it.  The drinks are fiiiiiiine, I guess.  Except – and this is a significant strike in my book – they are way too gimmicky.  One drink, for example, has Cocoa Pebbles cereal milk as an ingredient.  If they offered that at The Varnish (which they never would), I’d give it a shot because I trust them.  Here?  No.  Just … no.  And the service is … eh.  Not bad, not great.  The bartender waitresses always seem a little lost, and the wait staff in the main dining room just sort of do their jobs.

So, at the end of the day, what does Towne have?  A pretty great space.  And – hello, Perch – maybe that’s enough.

Which brings me to my other entrant in this category:  LeKa.  For those of who have been walking by the intersection of 6th & Flower and seen their “Coming Soon” sign for … 2 years, maybe? … well, they are now open. (and, for those who have wondered as I have, it’s “Le”, like the French “le”, and “KA”, like the show in Vegas)  In fact, the grand opening is tonight.  And, there’s no doubt about it:  LeKa is an awesome space.  I took a couple pictures myself, but they didn’t turn out.  Here’s the best couple I could find (sorry they’re so huge – this is what happens when you borrow pictures from the Internet):

The top one is the main dining room and the second one is part of the outdoor bar.  I’m not sure if this does it justice though – it definitely has a “wow, this place is cool” factor when you walk in.   And, besides this, it has great private rooms.  This place is high design, to be sure.

Now, I have to give LeKa a little more leeway because we went there on night 3 of its existence.  And I’ll give them this much:  this is a pro operation.  The wait staff is tight, the food and drink menus are both nailed down, and they are running smoothly – it had none of the new restaurant “rough around the edges” thing that you have to allow for.  (The wait staff is so well trained that the first thing our waitress asked was “have you been here before?” because that’s clearly what they’re trained to ask.  But my response was almost “uh, you mean yesterday?” given that they had just opened…)

But.  They say they do “modern American tapas.”  And they suggest ordering for the table and sharing.  Which is fine.  But what we ordered leaned more towards “Fred Flintstone tapas.”  The lamb shank looked like one of those legs you get at Fairs, either Renaissance or County.  The pork chop was a humongous triangle of meat.  The short ribs looked a little like they came off a tyrannosaurus rex.  (and, weirdly, the french onion soup was made of chicken stock).  Anyway, first, how do you share that kind of stuff?  And second, if I’m being honest, much of it lacked some flavor.  We did have a lamb sausage flatbread that was tasty, and the short ribs sure didn’t last long.  So, much like Towne, I’m not saying anything was “wrong” with the food.  I’m just not really drawn to go back there for the food.  And the drinks were fine but in today’s cocktail-forward world, they’re not going for earth shattering.  They were certainly respectable and well made, but same thing – I’m not going back for the amazing cocktail I had.

However, I AM drawn to go back there for the space.  This is definitely the kind of place that works when your non-Downtown friend wants you to take them somewhere “cool”.  (ie, it’s the kind of place I will take everyone who says – which they do all the time – ‘you’re a big Downtown guy.  Take me somewhere cool.’  It gets a little old, people.).  And, maybe that’s enough.  Maybe the food and drinks don’t have to be the star of the show.  They just have to be good enough so that people are willing to sit in the cool space and feel cool.

So.  Don’t consider this a warning.  Both Towne and LeKa are worth checking out.  Just go when you want to impress your friends with a cool spot, and lower their expectations for everything else.  Trust me – it works every time.