The Fickle Nature of Love

This post will be about the fickle nature of love. Not the kind of love you feel for your dog, or that you hope to feel for that chick from Logistics you’ve been eyeing; instead, I’ll be talking about the love you feel for a great bar or restaurant. You know what I’m talking about – the kind of place that makes you smile in anticipation of getting to go there again. Where you don’t have to look at the menu. Where they recognize you and ask if you want your favorite. A place that’s easy and comfortable and welcoming.

But, just like more traditional forms of love, this love isn’t always rational. It doesn’t always make sense. Sometimes you love a place for no good reason – and sometimes you don’t love a place even when you think you will or think you should. Sometimes, you just fall in love with the ugliest dog in the litter – and the cute puppy staring up at you just ends up annoying you. It just is what it is, and it’s useless to resist.

So today, I offer two categories of places: Places I Love More Than I Should, and Places I Don’t Love As Much As It Feels Like I Should. This is totally subjective, irrational, and perhaps a little pointless – but it’s kinda fun. Agree with me, disagree with me, or add your own in the Comments section!

Places I Love More Than I Should

Where Is It: Wilshire, between Fig and Flower.

What To Expect: Good, interesting Mexican food – with some sushi and sashimi thrown in for good measure. Upscale but comfortable setting with a wide range of choices.

Why I Love It: Like I just said, it’s upscale but comfortable. It’s unique, and it’s creative without being offputting. The service is always good, and it fills a needed niche in the Downtown restaurant scene. And the water wall between the kitchen and the restaurant is just cool – and it turns on and off (presumably depending on how exhibitionist the kitchen staff is feeling at any given moment).

Why It’s More Than I Should: I go there a LOT, and if I’m honest with myself, it’s more out of convenience than really being inexorably drawn there (I work nearby). The food is really good, but it’s a little more hit and miss than it should be – though they are steadily working out the kinks. The drinks are good but not great. And their biggest crime of all is that they used to have a dessert of homemade small cookies served on top of homemade, grilled marshmallows, each a different flavor (peanut butter cookie on a chocolate marshmallow or sugar cookie on a vanilla marshmallow), served with cinnamon milk. It was divine and heavenly … and they took it off the menu! (some bogus excuse about being too hard to make). Such a bummer…

Where Is It: 8th, just past Olive

What To Expect: Cute little Italian place with low prices where you can see them cooking your food, and the specials are whatever they find that’s fresh that day.

Why I Love It: See above. What’s not to love? It’s charming, and there’s an earnestness to please about the place that’s very endearing. These folks are really trying hard.

Why It’s More Than I Should: The food is good … but I’ve never found it as good as I want it to be given the surroundings. It’s the restaurant equivalent of that romantic comedy you really wanted to like and find endearing, but you ultimately admit to yourself is just not as good as it’s trying to be. Sadly.

Where Is It: 6th and Flower

What To Expect: Depends on when you go. During the day: very mellow, with some where-do-these-people-work-anyway? sun worshippers and swimmers. After work: happy hour revelers. Nighttime: club kids, dancing, and waterbed cavorting.

Why I Love It: On a nice sunny day, there’s nothing like it Downtown. It feels like an incredible escape and if you go for lunch, you’ll have the place to yourself. After work, as the sun is setting, and you’re looking at the buildings around you bathed in light, surrounded by happy people soaking it all in, it can approach magic. Like “I really do live in a lovable, inspiring, interesting, capital-C City.”

Why It’s More Than I Should: The drinks are awful, even for a “pump and dump” place. The waitstaff is completely hit or miss – they either love you or they’re too fabulous for you. They’ve gotten better, but for a long time, they looked down on the after work crowd (which is idiotic in Downtown). The tables are a little uncomfortable, but the couches are too low to the ground for comfortable sitting. And they have a cover and a rope line at night – boo. Basically, they’re lucky they have such an amazing setting. But it really can be amazing.

Why I Love It: I’m a sucker for a good steak, and the Palm serves ’em. Plus, it’s fun to look at who’s on the walls, who’s been taken down, who looks like themselves, who looks ridiculous, and gossip about who should be up there – or, more likely, shouldn’t be.

Why It’s More Than I Should: It’s a chain. It’s based in New York. It’s expensive. It’s “just” steak. It’s a ‘power place’ – which is OK, but can be a little stifling. But I’ll always see dinner at the Palm as a treat nonetheless. Especially when I’m not paying.

What To Expect: Argentinian food with a Southwestern flair in a whimsical, unique setting. And it’s owned by Mary Sue Milliken and Susan Feniger, formerly the Too Hot Tamales on TV’s Food Network.

Why I Don’t Love It Enough: Perhaps familiarity breeds contempt. I’m bored with it and, while the menu does change, it seems to have a “sameness” to it that prevents me from wanting to continue going back.

Why I Should Love It More: Because you can’t get food like it anywhere Downtown, or really anywhere else. Because the atmosphere feels very “LA” (it’s a great place to take out of town guests for both those reasons). Because they have live music during happy hour that’s usually really festive. Because they are still making an effort after all these years.

Where Is It: On Figueroa (duh), between 9th & Olympic, near Staples.

What To Expect: Moroccan oasis in the middle of Downtown LA, that’s aging in all the right ways.

Why I Don’t Love It Enough: It’s actually not that I don’t love it. It’s that I don’t GO. I’ve really only been for events – I can’t remember the last time I “just went there for a drink.” I don’t know why – like I said, this isn’t rational.

Why I Should Love It More: They say a picture is worth a thousand words. So: 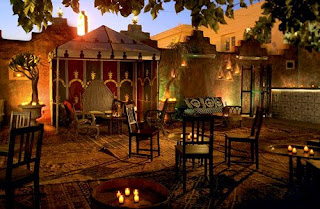 Need I say more? If the Standard rooftop can be a sunshiny, modern escape, then Hotel Fig can be an alluring, seductive escape. I’ll rectify this whole “not going” problem soon.

Where Is It: Alameda & Ord, one block north of Union Station

What To Expect: The original french dip! (don’t tell Cole’s) Sawdust on the floor, lines of people giving their orders to the most efficient, least interested waitresses around, food on Chinet paper plates, communal tables, and everyone from cops to nuns to corporate execs soaking in the history.

Why I Don’t Love It Enough: Sigh. Boy do I really want to like Philippe’s more, but I think this is just a personal preference thing. I don’t like all the chaos around ordering. It’s hard to balance your food on the flimsy trays. I don’t like having to weave through the tables trying to find a spot. I don’t like how loud it can get. And let’s face it: the sandwiches aren’t THAT good. They’re just historic. (let the “heresy” comments begin…)

Why I Should Love It More: Because it’s living Los Angeles history. Because only wusses care about getting jostled around a bit. Because the teeming diversity of humanity in the room (ironically, a rarity in Los Angeles) reminds you that we’re all in this together. Because it’s Philippe’s!

What To Expect: It’s at the bottom of the original historic loft restoration in Downtown, and it feels like it. Marble, high ceilings, exposed fixtures. Also, it’s something of a City Hall power scene at lunch.

Why I Don’t Love It Enough: The food is just serviceable (though the mac and cheese is pretty damn good). The patio area is too wedged in between the restaurant and the sidewalk. The bathrooms are downstairs, which is a pain. And for all the “historic feel”, it all adds up to … just a little bland for me.

Why I Should Love It More: Because Tom Gilmore took such a chance on Downtown and deserves our support. Because it’s actually a decent vibe, even if not as good as it could be. Because there are some decent dishes if you know what to order. Because it’s equally welcome to City Hall badge wearers and late night hipsters. Because I ran into Rachel McAdams and Ryan Gosling there once. (I just threw that in.)

So there you have it – some thoughts for you to chew on, react to, think about. We all have our irrational loves and our blind spots – those are mine. At least I own up to them – now it’s your turn.

Keep your enthusiasm up, and happy travels.