You know the old saying: Man can not live on Downtown alone.

Downtown Los Angeles remains ground zero for the cocktail renaissance in this City, and certainly has the highest concentration of cocktail-friendly establishments in the entire State (if not the entire United States, on a “cocktail bar per square mile” basis), mostly thanks to Cedd Moses.

But like all good things, success begets success. In case you didn’t know, Los Angeles is really the cutting edge of the cocktail scene right now nationwide. New York has been part of the renaissance for longer, but like many things New York, the cocktail places there seem to have gotten a little too cool for their own good, requiring reservations, unlisting their phone numbers, and generally trying to over-exclusivize themselves (to coin a phrase). They’re still great, but they’re not so easy to drop into and have gotten a little serious. Los Angeles, as we are known to do, is more accepting and just wants people to have a little fun – but more and more places know how to mix a good drink. So we have a confluence: more and more restauranteurs in LA are coming Downtown to see what all the fuss is about and getting interested in cocktail stuff, at the exact same time that some of the folks who have made a name for themselves in New York are looking for a place to spread their wings, try some new things, and basically breathe a little.

At the same time, much like a celebrity chef needs a chef de cuisine who can actually cook their food on a daily basis, these cocktail “celebrities” need people who can actually make their drinks, and make them well and consistently. And Downtown has certainly nurtured its share of bartending talent – people who themselves are spreading their wings, looking for new ways to challenge themselves.

Hence, I bring you the Tar Pit.

This is not the first restaurant in the City with good cocktails – Sona, Comme Ca, and Providence are on that list. But it is the first quality restaurant I’ve seen that is also so forward and ambitious about its bar and its quality cocktails. When you walk in, you see a great restaurant to your right – but directly in front of you is a beautiful, inviting bar facing that restaurant down as if to say “I can keep up with your food, so try me.”

Mark Peel, of Campanile and Top Chef Masters fame, is the chef/owner. Audrey Saunders, a fairly legendary mixologist from the Pegu Club in New York created the cocktail menu, with an assist from Chad Solomon of New York’s Milk and Honey (which is something like Mario Batali and Nancy Silverton opening a restaurant together). And our very own Marcos Tello – one of a very few L.A. bartenders who approach celebrity status – has been stolen from the Varnish and the Edison to be head bartender.

The outside is welcoming but unassuming – it’s on La Brea between Beverly and Melrose, most easily found by looking for the big, bright Cube wine bar next door. Here’s what the front looks like:

Now, as you have probably figured out by now, I am a big fan of “vibe.” Vibe doesn’t always mean high design, but a place has to have a certain feel to it, and it has to know what it’s trying to be. A good vibe can overcome a LOT of deficiencies. And the Tar Pit has it in spades. Check out the interior (photo courtesy of Thirsty in LA – thanks!): 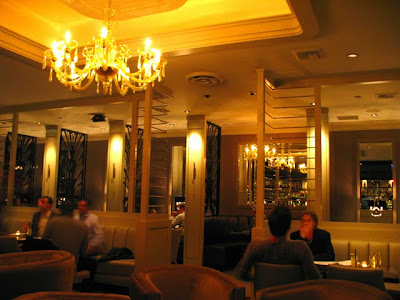 It’s tough for a picture to do it justice, but trust me, it’s cool. It is all 1940s Art Deco Los Angeles, but with a modern, welcoming feel. You walk in, and immediately never want to leave.

I’m going to be honest: the food is still coming along. It’s only been open a few weeks, and it’s always unfair to judge a restaurant in that short a period of time. But it’s already good and I have no doubt it will be great. The pork sausage is really great, the duck sliders are supposed to be outstanding, and they have a wide variety of small plate and large plate options.

But the cocktails are already superb. The Cucumber Mint Creole is a wonderful mix of gin, sherry, muddled cucumbers and mint, and some lemon juice (and probably a couple of other ingredients). I see those ingredients and think “kicked up mojito”, but the drink had a flavor all its own. And the Liquorice Rye Smash is out of this world – actually, just the house-infused liquorice rye is wonderful all on its own. Cinnamon and tart and sweet and rye all come together beautifully – I can’t imagine how many batches of trial and error resulted in this delicious concoction. But really, all the drinks are quite tasty – and many of them have a rum-based sort of neo tropical theme. It’s all really fun.

What comes next? Cocktail flights – yes, flights. Cocktails paired with particular dishes. Basically, stuff you don’t see anywhere else – and a further indication that they take this direction seriously, which will only result in more interesting offerings down the line.

And if you go now, Mark Peel is often still wandering around, Audrey is probably somewhere in the back, and Marcos will more than likely be shaking out your drink. The service can be a little rocky as the kitchen still finds its legs, but you’ll feel so old Hollywood glamorous, and be so happily imbibing such creative concoctions that you won’t care.
Stay safe, and happy travels.