The Virtues of Winging It

One of the things I love about Los Angeles is that it’s a “found” city.  I have written about this before but it bears repeating.  Unlike New York or Chicago or San Francisco, LA doesn’t come to you.  Which is offputting at first – our architecture isn’t striking, our sprawl is overwhelming, our urban fabric is just plain haphazard.  But that makes “the find” that much sweeter – the great little corner sushi spot that nobody knows about, or going to that little 99 seat theater on Santa Monica Blvd. for a quirky play, or finding that your favorite bar is unexpectedly hosting live music with a better-than-they-should-be band.  Those are the times that I renew my appreciation for LA.  Those other cities make you conform to them – LA conforms to you. LA values the individual.  LA is what you make it.

But this doesn’t always happen automatically.  Yes, LA is a city where you can stumble into things.  But sometimes you have to choose to take that step.  You have to take a shot.

Which leads me to what happened the other night.  I was out with a friend who’s relatively new to Downtown at a relatively new bar on Spring called The Falls (perhaps the subject of a future post, but if you haven’t been there, you should go).  We were traipsing over to The Association but as we were walking by the old Los Angeles Stock Exchange building, we saw that something was going on.  I looked a little closer, and it looked like Macallan was doing a tasting.  My friend and I then had the following exchange:

Me:  “Sure.  But we’ll just keep going until somebody says no.”

Did I really care about a Macallan tasting?  No.  But the Stock Exchange is a cool venue, and it looked like they had it decked out … and, really, half the fun is just checking it out and seeing what happens.

So the guy checks our IDs and asks us to check in with a woman who was managing the list using an iPad.  Very 2010.  The woman asks for my name, so I give it to her – of course, knowing full well that I’m not on the list.  Once she figures that out, I mumble something about just having gotten the email that morning so maybe it didn’t go through.  She hesitates and then cheerfully says “No problem.  Just give me some information and I’m sure it will be fine.”  And truthfully, I don’t even think I would have had to give her the minor fib about the email (clearly, I had not gotten an email) – I think we could have just asked nicely and it would have been fine. 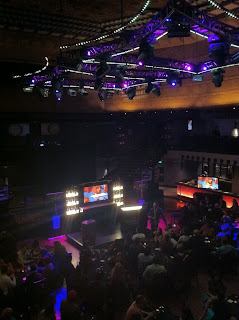 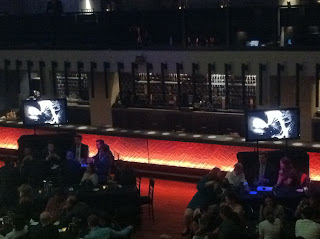 These might be a little hard to see, but they had gone all out.  The Stock Exchange practically looked like a nightclub.  And we got a really cool history of Macallan, along with tastes of 10, 12, 15, 17, and 18 year old scotch.  As tastings go, it was a little corporate, but hey – it’s not like we paid.

But that was kind of beside the point.  The larger point is that we saw an opportunity and grabbed it.  We didn’t know what we were going to find.  We didn’t know if it would be good, bad, or otherwise.  But that’s half the fun – the adventure of not knowing what you’re stumbling into.  But you know what?  You’ll never stumble into the good if you don’t risk stumbling into the bad.

So what’s the moral of this story?  When you see an open door, and it looks like something halfway interesting is going on inside, walk in!  Both literally and metaphorically.  Don’t think to yourself “I didn’t know about it” or “I’m not on the list” or “It must not be for me.”  All anybody can say is no.  And if you handle yourself respectfully, they won’t care and you will have lost nothing.  You will politely say “Oh, I’m sorry.  I just thought it looked interesting.” and be on your way.  But what’s more likely is that the people on the other side will welcome you in, and you’ll be the better for it.  Or, at minimum, you’ll have a good story to tell for your blog.  😉