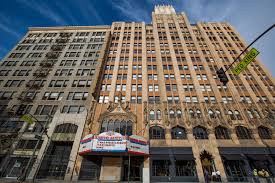 Try to contain your shock.  Nothing from me in months, and now two posts in two weeks.  You’re welcome.  It’s one of those Friday afternoons where it’s either a) start a whole new round of work, or b) procrastinate.  So you get the benefit of my procrastination.  Assuming you find this little vanity project a “benefit”, however small, in your day.

My last post pushed you up the 2 freeway to our local foothills of La Canada to check out a worthy gastropub-style restaurant, certainly far better than its location in the land of Los Gringos Locos and Georgee’s Pizza would suggest.  But this post, fear not dear readers, will plop you right into the heart of our beloved Downtown Los Angeles.  To one of the most awaited openings in years.

The Ace Hotel, on Broadway between 9th & Olympic, has been hotly anticipated for, it seems like, ever.  Why?  Start with the fact that its global hipster credentials are unassailable (I recognize that the term “hipster” has evolved into the realm of the pejorative, but it’s still why people are flocking to Ace so take it for what you will).  With outposts in London, New York, Palm Springs, Portland, Seattle, and Panama (like, the country.  Go figure.),  Ace’s reputation heartily proceeds it.  The Ace chain is run by the kind of people who put this on its website:  “Ace Hotel is a collection of individuals — multiple and inclusive, held together by an affinity for the soulful. We are not here to reinvent the hotel, but to readdress its conventions to keep them fresh, energized, human.” ‘Nuff said.

But that’s not the only reason Downtowners have been salivating over Ace.  Look back at that location I threw in there.  Broadway between 9th & Olympic.  As I wrote about nearly two years ago, development has been slowly working its way that direction with the opening of Umamicatessen (except now it’s just another Umami), Pattern Bar, the late, lamented Parish, and significantly, Alma, named the Best New Restaurant in America – yes, in frickin’ America – by Bon Appetit last August.  (and named Best New Restaurant in Downtown by yours truly 10 months earlier).  But admittedly, it was all ‘burgeoning’.  No single one of these things, even the tiny, unpretentious Alma, was going to singlehandedly draw people – and development – that direction.  Until now.

Ace is a hotel.  It’s a restaurant.  It’s two bars – a mezzanine bar and a rooftop bar (more on that in a moment).  And it’s connected to the historic United Artists theater, which will offer regular programming starting next Friday.  The simple fact that it’s actually going to regularly offer shows and concerts inside one of Broadway’s historic gems is reason enough to celebrate.  Add in a great restaurant, awesome bar, and reasonable hotel, and you’ve got something with tons of potential.

Speaking of all that, here are the de rigeur pictures.  It’s too difficult to put text between each one, so you’re getting, in order, 1) the restaurant; 2) the exterior; 3) the best view I could find of the rooftop bar; and 4) just a cool pic looking straight down at Broadway.

Take another look at that rooftop bar.  This is just part of it, and it rivals the best in Downtown – only Perch comes close, and the drinks at Ace are way better.  Look up and you’ve got that cool Gothic spire.  Look out, and you’ve got all of Downtown before you.  I’ll be honest: it’s a bit scene-y right now.  (see previous mention of “global hipster cred”).  But sooner or later, the girls teetering in with carefully disheveled guys on their arm will figure out that a) it’s expensive to Uber from the Westside; and b) they’re Ubering to the corner of 9th & Broadway, and that will scare them.  So, at that point, the Ace rooftop bar will settle in to what it’s destined to be:  one of Downtown’s coolest “impress your friends” destination.

Ace has only been open for a couple weeks, so it’s still working out some kinks.  But it’s the kind of place that just fits what Downtown LA has become:  edgy yet respectful of its past; unmistakably new surrounded by the allure of the old; comfortable yet interesting; and most of all, effortlessly cool.

There you have it.  Your newest destination.  Get there before everyone else knows about it.

And don’t get used to this every Friday thing.