Best. Bloody. Mary. Ever. (and it’s still a secret)

In addition, as you can tell by the title of this blog post, it’s not just any particular drink.  It’s an iconic drink.  A drink for which there are drink competitions.  A drink you tell your friends about.  There really aren’t too many drinks like that.  Now that I think about it for a second, I can only think of two: the bloody mary and the margarita.  Nobody ever advertises “the best” for any other kind of drink.  People offer all sorts of variations on the mojito, and lesser establishments (that won’t be blogged about here) brag about the kinds of shots they offer.  But margaritas and bloody marys are the only ones that people compete over.

So where do they serve this marvelous concoction?  Somewhere I’m guessing many of you won’t expect and more of you haven’t even visited in awhile:  Jones Hollywood.  Yes, that Jones.  The one across from Formosa Cafe.  Remember?  This place: 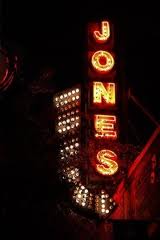 The one that was super hot when you were in college and that you’ve since forgotten about.  But Jones is still there, going strong, and under longtime bar manager Eric Tecosky, still making some of the best drinks around.

But you can’t just go in and order this bloody mary, because it’s not on the menu yet.  But you know about it – at least you do now.  So how do you get it?  Two magic, still secret words:  you order the “Proud Mary.”  They’ll know what you’re talking about, and bring you a tall glass of spicy perfection.

So what makes this bloody mary so special? To be honest, even if I knew all that went into it, I wouldn’t tell you.  I’ll simply tell you two key things:  1) Eric infuses his own vodka.  Garlic and pickled green beans and horseradish and all sorts of other awesome stuff that makes a bloody mary a bloody mary.  But because the flavors are right in the vodka, they infuse the whole drink.  And 2) Eric ALSO makes his own spice mixture, and I’m not even going to begin to tell you what goes into that (though it does include Dirty Sue olive juice, which is Eric’s thriving side business.  If you drink martinis, go to Bev Mo and pick up a jar).  So this isn’t a bartender throwing together some tomato juice, vodka, worcestershire, horseradish, and trying to get it right.  This is skill, applied to an iconic drink, impeccably executed – and, by the way, done in a way that doesn’t really depend on who makes it for you.  The taste comes from the infusion and homemade spice mixture – all the bartenders really have to do is get the balance right with the tomato juice, and they will, every time.

So do yourselves a favor:  give Jones another whirl.  The food is still quirky Italian, complete with fortune cookies.  The vibe is still a little Hollywood, but comfortably settled in by now.  It’s still busy every night.  And remember:  Proud Mary.  Say it a little quietly – you wouldn’t want everyone else to pick up on your secret now, would you?