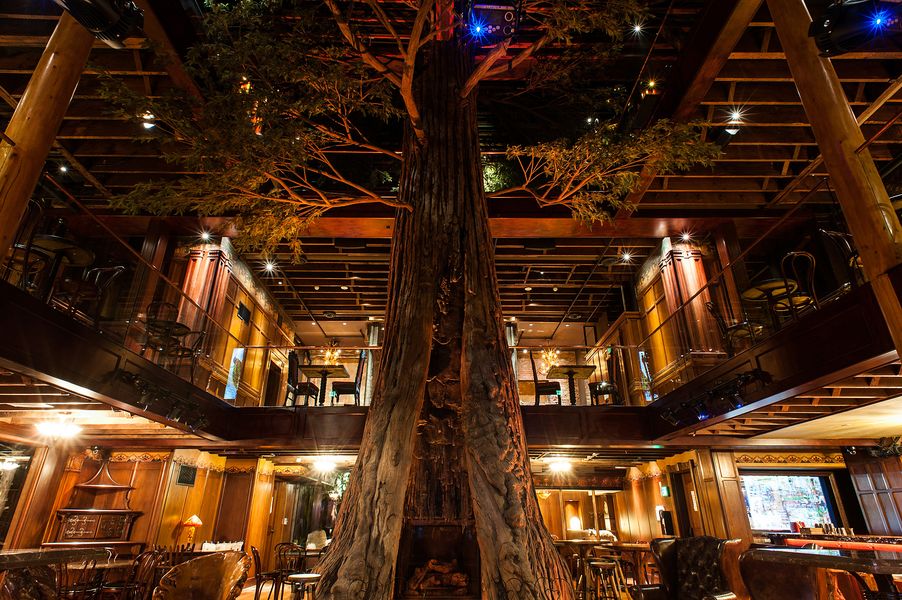 So, I “finally” made it into Clifton’s last night.  I put quotes around “finally” because it seems like it’s been forever in the making (and it has – over 5 years), but it’s only been officially open for two weeks, so it’s not like I’m late in getting there.

This post isn’t really going to “tell” you about Clifton’s.  It’s gotten more press than any Downtown opening I’ve seen since, well, ever.  A quick search of the LA Times brought up 5 or 6 articles in the last six weeks alone (see them here).  I’m also not going to post a bunch of photos for two reasons:  1) I’d have to post WAY too many to give you a feel for the place, and 2) my photos really wouldn’t do it justice.  To prove my point, Eater LA posted 56 – 56! – photos to try to capture the place, so your best bet is to click here and check those out.

Oh, OK.  Here’s ONE.  Just the tip of the iceberg to entice you to click the link and check out the rest:

For those who don’t know, a quick, incomplete history lesson:  Clifton’s dates back to the 1930s and was a Los Angeles institution right off the bat, especially because Broadway, where Clifton’s is located, was a true entertainment hub, with its still-operational palatial movie houses drawing throngs of Angelenos to their bright lights every weekend.

But Clifton’s Cafeteria became an overnight institution for a more basic reason:  in those tight Depression-era times, owner Clifford Clinton, whose parents were missionaries and devout Christians, put up a sign that said “No guest need go hungry for a lack of funds” and, with that, Clifton’s instituted what became its legendary “pay what you can” policy.  Starving writer Ray Bradbury wrote many of his books there (which I heard him say directly when he was still alive), and Walt Disney used to be a regular.

There’s another reason Clifton’s became so famous – and attracted the likes of Walt. Clinton’s parents were also missionaries, and he had lived all over the world growing up.  Perhaps as an homage to his travels – or maybe just because he was a bit of an odd guy (more on that later) – he decided to decorate Clifton’s in a sort of “faux-nature” theme, with rocks, waterfalls, stuffed animals, and fake trees.  Kids loved it, and adults were sort of amusingly baffled by it – but it kept them coming back.

So what of this guy Clifford Clinton?  Well, since politically-minded folks make up a fair percentage of the readers of this little vanity project, you might be interested to learn that, aside from becoming a cafeteria maven, Clinton has an interesting yet important footnote in Los Angeles political history.  As I just learned from our Mayor, Clinton was actually responsible for the only successful recall of a sitting Mayor in Los Angeles history, and did more than perhaps anyone else to expose the rampant corruption that used to be a pervasive part of Los Angeles political life.  Short version:  Clinton was asked to investigate food service at the County General Hospital (by County Supervisor John Anton Ford of Ford Amphitheater fame).  He found out it was terrible, with patients getting spoiled food and officials pocketing the money … which nobody wanted to hear.  So all of a sudden, his restaurant started getting hit with random inspections and frivolous violations.  This just pissed him off, so he went after the powers that be, which included the Mayor, Police Chief, District Attorney, and leaders at the LA Times, along with some underworld types, who were all part of this corrupt group loosely called “the Combination”.  He eventually uncovered 600 brothels, 1,800 bookies, and 300 gambling houses.  Now these Combination folks got really mad.  His house was bombed, his allies’ cars were blown up, and the Times took to calling him “Public Enemy No. 1” – basically, things got crazy.  But Clinton kept going, gathered enough signatures, and eventually got LA Mayor Frank Shaw voted out of office, and his ally, Judge Fletcher Bowron, voted in.  To read more, click here for a concise but pretty fascinating account of the whole thing.  Postscript:  Clinton ended up running against Bowron in the next election, who had let him down for various obscure reasons, and ended up losing badly.  The guy was basically an effective gadfly.

ANYWAY, so there Clifton’s sat, providing comfort cafeteria food to millions of Angelenos with turkey and jello and pies in display cases for decades.

Until Andrew Meieran took over, buying out the lease in 2010 and promptly closing it in order to bring Clifton’s back to some semblance of its glory days.

Who is Andrew Meieran?  Well, among many other things, he’s the guy who created The Edison, still perhaps the most impressive bar in Downtown (well, maybe until now).  If you don’t know about The Edison, I can’t help you.  I guess click here for a quick primer (fun fact: that link links back to my very first post ever, where I mention The Edison #2 right after Seven Grand in my then-comprehensive list of Downtown bars).  So he’s known for massive renovations that result in amazing spaces, the likes of which take awhile to explore, filled with curiosities, attractions, and an amazing attention to detail.  That’s Clifton’s.

So Meieran takes 5 years and spends $10 million to restore Clifton’s.  You read that right – $10 million in one space.

Was it worth it?  In a word:  you bet your ass it was.  There is no place like this in Southern California or, really, anywhere.

It’s not done yet. Places this massive don’t open all at once.  Right now, it’s two bars and the cafeteria.  To be joined by three more bars and another restaurant as they get going.  So go now to get a feel for the place and explore what’s there, so you can focus on the new stuff as it opens.

The drinks are (already) amazing.  Why do I say “already”?  Because this place just opened two weeks ago, but you would never know it, at least at the bars.  These are pro bartenders, and well trained.  Which is not surprising, because one of LA’s originals and still one of its best, Damian Windsor, is the “pappy of all this shit”, as one of the bartenders said to me.  He’s a creative drink creator but, even maybe more than that, he knows how bars should run and it shows.

The food is good … but they’re still figuring it out.  First, let’s be clear:  Clifton’s is still cafeteria food and proud of it.  But … it’s housemade, high quality, really good cafeteria food.  That being said, a LOT of people are flocking there right now, and they’re still figuring out the service and the quantities and what not.  They run out of stuff, it takes awhile to get the food, and it’s just still a little rough around the edges.  When you open a place this massive, it’s gonna take awhile to get things figured out no matter how much you train people and prepare for the throngs.  So just be patient.

You go for the décor as much as anything else.  Yes, the food and drinks are good – much better than they have to be, actually, given how dramatic the set up is.  But I feel like I could go to Clifton’s indefinitely and still see things I hadn’t noticed yet.  There is just So. Much. To. See. I mean, there’s the obvious like the 5 story tree in the middle of the place (see that picture up above) and the waterfall in the lobby.  But there are little touches all over the place – it’s clear that Meieran has just been collecting stuff for 5 years and finding places to put it.

Clifton’s is just like Los Angeles.  I have to give Mrs. Enthusiast credit for this one.  So look, let’s just say it: Clifton’s is a little chaotic, or maybe “unstructured” is a better word.  There are tables all over the place, on 3 different levels.  You get your food on the first level, but then take your tray anywhere you want.  The second level is a little smaller, but has a bigger bar, while the third level has a smaller bar, but is huge – and the back part feels like it’s straight out of Boardwalk Empire.  So as we’re leaving, I say “I really like everything, but I’m just not sure I know what to *think* about this place.”  And Mrs. Enthusiast says “I like the chaos.  You just have to embrace it and figure out what you like about it.”  (beat) “It’s like Los Angeles.”  And the lightbulb went off.  It’s *exactly* like Los Angeles.  I always say that L.A. doesn’t really come to you, unlike other cities like New York or Chicago or San Francisco.  L.A. is just … here.  Not necessarily making it that easy on you.  But that’s what I LIKE about L.A. – you can make it your own.  It takes a little work, but it’s worth it.  Whether it’s that corner noodle shop that you love taking your friends to, or that time you went to that little theater on Santa Monica Blvd. to see a friend’s play, or knowing that tucked away little neighborhood park that you can ride your bike to … Los Angeles is a city that rewards those who are willing to put a little effort in.  Bringing all this high falutin’ philosophizing back to earth, that’s Clifton’s.  I mean, yes, Clifton’s immediately strikes you as a unique, compelling place – that part doesn’t take work.  But “learning” Clifton’s – where you like to sit, what all the different decorative elements are, maybe asking the staff the story behind some of it, how the place just sort of flows – will take a few visits.  But every one of them will be worth it.

Well, it’s clear that I had a few calls and meetings get canceled today, because this is way longer than intended.  But I couldn’t wait to tell you guys the deal about the biggest opening in Downtown since … well, since I can remember.

Happy travels – let me know what you think.