Well, it’s been awhile.  How have you been?

A couple of new places have opened Downtown that I’ve wanted to write about, but thought I hadn’t found the right ‘hook.’  But then I realized – that *is* the hook.  Not everything that opens Downtown has to have a bunch of major fanfare, or has to have some sort of gimmick, or has to cater to a certain crowd.  In fact, not every place in Downtown should be like that.

With all the new places that have turned Downtown into the vibrant center that it is (becoming), one of the missing niches has been the classic, simple “after work” bar.  I think the best evidence of the hunger for a bar like that is the Library Bar on 6th & Hope.  Yes, it’s got a nifty library vibe, and it feels like an escape, but I think the real reason it’s thronged every afternoon is that it’s open early, it’s centrally located, and it’s easy to get a beer or a simple cocktail with maybe a little food.  Much as I love many of the Downtown bars, not very many of them can say that.

So, here are two more entrants for your consideration the next time you want to grab a drink after work with friends.  Nothing more – you don’t want it to be a major production – and nothing less – you still want good service and decent choices.

Fellow Enthusiasts, I give you Public School 612 and Dublin’s.

There are actually a few interesting things about both places.  We’ll start with PS 612.  For those of you who were/are confused as you walk by, yes, this is the bar inside the Daily Grill.  I’m usually skeptical when corporations try to “rebrand” themselves – it always seems like they just asked their graphics department hacks to come with some new logo and convince me it’s something different.  But I gotta hand it to them – this really, truly feels like a new – and separate – bar.  (side note: when big corporations decide to invest what must have been into the six figures to refresh their Downtown location, it means that Downtown is worth investing in…)  Except for the few feet between the front door and the portal to the bar, you’d never even know you were in the Daily Grill (which I consider a good thing).  And it fulfills all the requirements of a good after work place – it opens early (4 pm), it’s got good beer specials (including lots of interesting ones on tap), and it’s got some food.  Not gourmet food, but decent food (because drinking on an empty stomach is not a good thing).  Here’s a couple of pics, as usual (thanks, Grub Steet): 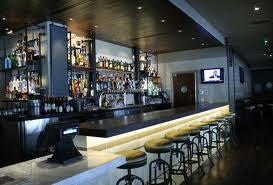 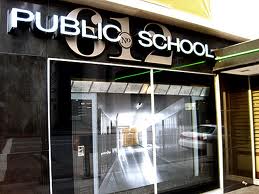 Now, on to our second destination:  Dublin’s, just up the street and around the corner.  A couple of interesting things about Dublin’s.   First, yes, this is the Dublin’s that used to be on Sunset Blvd.  So yet another establishment has picked up its Hollywood roots and joined the Downtown renaissance.  Second, it was open and then it closed, and then it just recently reopened – meaning, they stuck with it through some permitting issues, which is also a good thing.  But be forewarned:  Dublin’s is definitely a sports bar (as will immediately be clear from the 40 flat screens lining the wall).  And it’s clearly an after work, drop in spot.  Not hipster, not trying to be anything other than what it is.  But you know what else it has?  Over 100 beers for $3.  All day, every day.  Open to close.  Which helps explain why it’s thronged every night.  And what’s also cool is that it’s in the old Ciao space in the Fine Arts Building, so even though it’s a pretty classic beer-and-fried-food pub, it’s got some character to it.  This is the place to do it like the British do – have someone get there early to snag a table, go with friends, order some pints, and wind the day down right.  Again, pics for the curious: 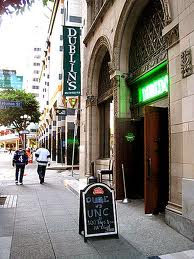 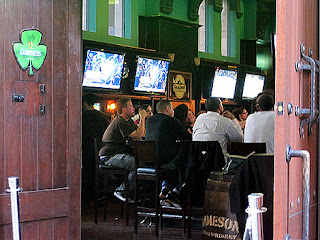 So next time your friends say “let’s grab a drink after work – but I don’t want one of those hipster joints that the Amateur Enthusiast is always writing about,” now you know where to go.