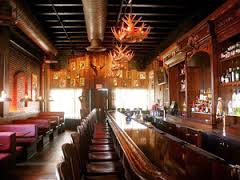 So, sometimes you seek things out and sometimes you stumble onto them.  I’m a fan of both – and to really enjoy what Downtown and all of Los Angeles has to offer, you do have to be a seeker – but I especially enjoy the found treasure.  The “I didn’t know this was here?!” moment.  That frisson (good word, frisson) of buzzy excitement when you feel like you’ve discovered something new and unexpected and interesting.  Kind of like when you find an unexpected $20 in your pocket.  But different.

Today, I give you two places that offer (free, unexpected) live music, which Downtown frankly has a dearth of.  Granted, you’ll have to stay out a little later on a school night to check them out, or come on the weekend, but still … I’m just happier knowing it’s an option.

First up is a place I’ve been meaning to write about for awhile.  Raise your hand if you remember a place called 410 Boyd.  410 Boyd was one of the original pioneering restaurants in Downtown.  Named after its address near 3rd and San Pedro, and in what is even today an “emerging” part of Downtown (an area the new place’s owners charmingly call “Skidrokyo”.  Get it?  Somewhere between Skid Row and Little Tokyo.  I just consider it down the street from Lazy Ox), it was truly an island when it opened in 1992 (fun fact: the chef at Traxx was the original owner/chef at 410 Boyd).  Frequented by arts district folks and Downtown pioneers (it was Ira Yellin’s favorite.  If you don’t know who that is, do yourself a favor and find out), 410 Boyd became a stalwart, and deserves a place in the eventual pantheon of “restaurants that helped put Downtown on the map.”

But, for reasons that remain unclear (admittedly, it had grown a little long in the tooth), 410 Boyd closed.  RIP.  However, in its place opened a joint – and this place is a joint – that, while very different, is a welcome substitute.  The Escondite (yes, hiding place in Spanish due to its fairly obscure location) is a woodsy, Western-y place that specializes in burgers, beer, and character. It looks like this on the inside:

Gourmet, this ain’t.  Example: the Captain Kangaroo burger includes an overeasy egg, hash browns, cheddar cheese, canadian bacon, gravy, and cholula.  It’s unclear whether it also includes heart attack medication.  But it has vegetarian options, sandwiches, salads, the usual.  And it’s certainly tasty and totally comfortable in its own skin.

And, while I’m talking about looks and location, here’s the outside (yes, it’s sort of nestled in the back of a parking lot):

All that being said, while I haven’t avoided writing about it, it just hasn’t really poked its way through my clutter yet.  Until now, because just the other day, I discovered they ALSO have live music every night.  Country (natch), jazz, rock – just awesome bar band stuff.  And where in LA can you get that?  OK, so it usually doesn’t start until 10:00 but hey – that’s the price of fun.  (full calendar on their website)

Next up is a brand spankin’ new place that is still in its soft open phase.  It’s an unassuming storefront on 8th between Olive and Hill, just a few doors down from the Golden Gopher.  Ham and Eggs Tavern.  Can’t find a picture of the outside (probably because it’s just a glass door and an old timey painted sign on the window).  But when you first walk in, it looks like nothing more than a bar and about 15 stools.  This pic is crowded, but you can see that it’s pretty small:

Just beer and wine, but interesting beers and wines.  If this place were nothing more than a small little bar with friendly servers and cool libations, it would still be worth a mention.  But what makes it even cooler is that you walk to the end of the bar, turn right, cut through a little passage, and you find an actual  performance space.  It looks like this:

A little hard to see with this pic, but that’s looking towards the stage.  Apparently, KCRW is doing more and more stuff here and the entertainment is a rotating mix of DJs, bands, and generally cool stuff.  Plus, its location puts it somewhere where it can be part of a night out – the Gopher, Bottega, Seven Grand, even Umamicatessen and LA Brew Co aren’t THAT far away.

You have to follow their Facebook page to know who’s playing on what night, but it has all the makings of a very cool spot (also good because you don’t HAVE to do the live music thing if you just want to go for a drink) and it will get even better as they get their legs underneath them.

Looky there – a new post when the ink is barely dry on the last one.  Enjoy, and happy travels.  See you at Coachella.

Also no phone.  But you’re not really calling anyway, are you?