The Virtues of Rebirth, Thrice 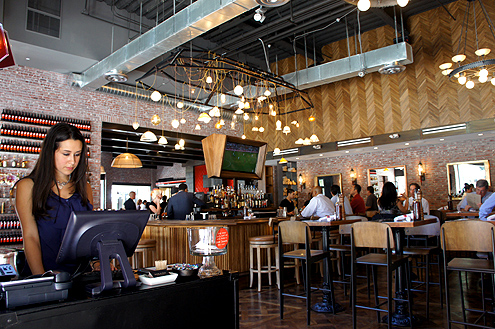 Well, here we are again.  Sometimes you hit on a theme and it proves itself relevant beyond what you could have predicted.

In Act 1, we considered a situation where the owners of an existing place that has been successful and is still doing well decide to reinvent themselves.  And, while we mourn the loss of the old place we liked, we celebrate the fact that the owners see the place, and the surrounding area, as worthy of their investment.  It shows continued vitality and bodes well for continued growth.  It’s sort of a “it isn’t broken, but we’ll do better by fixing it” strategy, and it’s nice to see.

In Act 2, we considered the situation where you sort of WANT a place to close, and you celebrate the fact that it gets replaced by something more local, more locationally appropriate, and something that will help drive surrounding development.  It’s somewhat risky because unless one leads right into the other, you get nervous that the closed place will stay closed – the only thing worse than something subpar is nothing at all.  But in this case, it was especially sweet that it was a Carl’s Jr. that got replaced with a great place like Industriel.

Now, in Act 3, we consider a situation where we *don’t* want a place to close, but it does – bad economy, poor management, whatever – and you hold your breath to see what’s going to happen to the space.  In this case, what closed was Zucca, an Italian place in the Joachim Splichal family of restaurants (Patina, Cafe Pinot, Nick & Stef’s, etc.).   The food at Zucca was fine, but what made it especially important was its location:  Figueroa between 8th & 9th.  Why is that so important?  Because it helps create the connective tissue between neighborhoods.

What do I mean by that?  Consider Manhattan.  I typically hate when people compare Downtown LA to Manhattan, largely because it’s usually negative, as in “Downtown LA will never be Manhattan”.  Well, duh.  Different history, different geography, different rules, different culture, different everything.  It’s like saying Santa Monica will never be Miami – it’s an irrelevant comparison.  But for today’s lesson, Manhattan does help make the point.  You see, if you ask a Manhattanite where they live – assuming you are actually in Manhattan – they won’t say “Manhattan”.  They will say “Upper West Side” or “Soho” or “Meatpacking District” or whatever.  Same with Downtowners – they live in South Park or the Historic Core or the Arts District.  But in Manhattan, the neighborhoods naturally flow together.  In Downtown, because our revitalization is so new, in order to get from the bustle and life of South Park to the bustle and life of, say, the Historic Core, you’ll have to walk through some fairly dead areas.

Which makes places like Zucca, which exist in those “in between” areas (in this case, from the Financial District to South Park – or, in layman’s terms, between the heart of Downtown and Staples Center), so important.  They help eliminate, or at least mitigate, that problem.  So when a place like Zucca closes, it’s especially impactful on the larger urban dynamic.

I’m happy to report that this story has an especially happy ending.  You see, while I liked Zucca fine, it was a little pricey for what it was, the layout was a little strange, and, while I was very glad it existed at all, it wasn’t exactly optimal, especially given the aforementioned geographical importance.

But that’s all been changed with the opening of Soleto.  Soleto is important for a number of reasons.  Because we all like numbered lists, I’ll enumerate them (nice $5 word, eh?):

1) It’s better than what came before.  It’s not that the food is necessarily better than Zucca, but it’s a better concept that will attract a wider variety of people.  It’s essentially an upscale casual Italian place with a straightforward menu of pizzas, pastas, salads and entrees (“secondi”, in the vernacular).  They opened up the space more, moved the entrance to be more accessible, and made it more communal feeling, with long high tables near the bar to accompany the booths.  Here’s the only decent pic I could find, courtesy of Brigham Yen:

2) Beyond the importance of its specific location, it fills an underserved niche in Downtown overall.  What niche is that?  The “easy, not-too-expensive, casual, but still cool and inviting” niche.  Downtown has places that are most of these but not all of them.  Bottega Louie is close, but I wouldn’t call it “easy” given that it’s always slammed (good problem to have).  Pete’s doesn’t feel as much like a place that you can just “drop in”.  LA Live places are not “cool”.  Artisan House is great but, again, doesn’t feel quite as “casual cool”.  I could go on, but the point is that Downtown doesn’t have many places that you can feel just as comfortable in jeans and a ball cap as you would on an actual date, and where – at least for now – it’s pretty easy to get a table.

3) It’s owned by Hollywood people.  Soleto is owned by the same company that does Boa, Sushi Roku, Delphine & the Living Room at W Hollywood (in fact, the chef at Soleto comes from Delphine), and other places.  This is their first foray into Downtown.  Why is that important?  Because it sends a signal to the industry.  Downtown obviously already has phenomenally successful restaurants and bars.  But, with the exception of LA Live which is a unique construct, they have almost all been shepherded by single minded, courageous individuals who took a risk and saw it pay off (I’m looking at you Cedd Moses, Tom Gilmore, Andrew Meieran and many others).  Which means that larger restauranteurs, and others who don’t intuitively “get” Downtown, are more likely to see success as an exception that is created by those kinds of people, versus an understandable business proposition that they feel like they can make work.  So when people who are more well known for running buzzy Hollywood places make the trek east, others are more likely to take notice.

So here’s to the success of Soleto.  And Towne.  But that’s for the next blog post.