In Defense of the Corporate 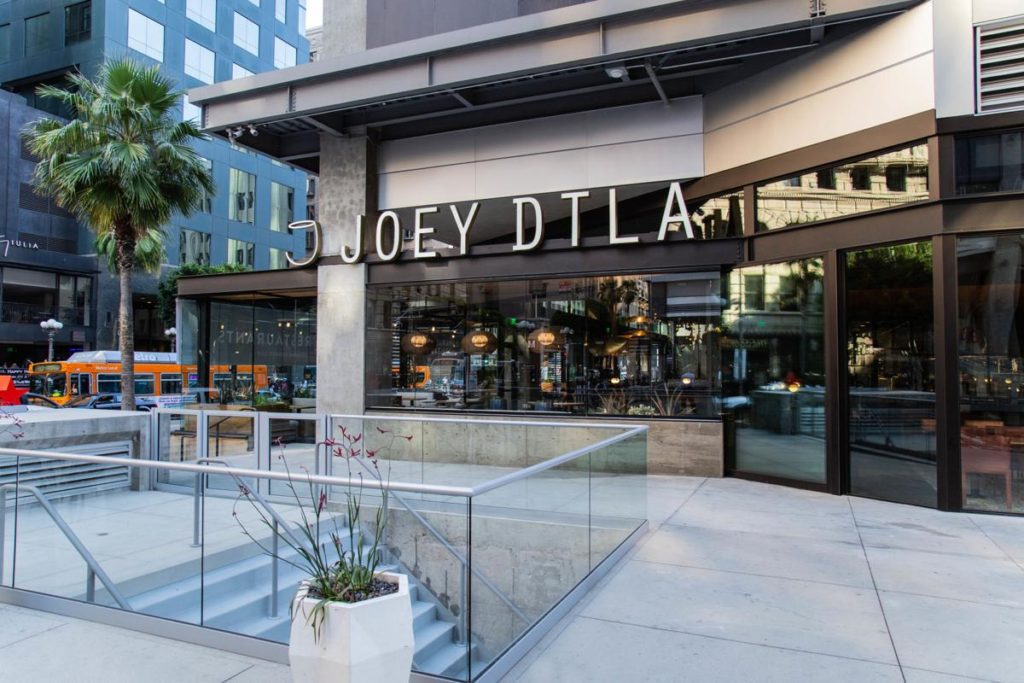 Let me start this post by saying this is a positive recommendation. Loyal readers of this little vanity project know that, as a rule, I don’t write about places I don’t like. People often ask me about my “reviews” of places, but the truth is that I don’t see myself as a reviewer. I see myself as a champion. A proselytizer, really. Someone who finds places I love in a city I love and, specifically, in the part of this city I love best – Downtown LA – and wants to make sure people know about them. So I’m not here to just generally tell you whether some particular place is good or bad. I’m here to tell you about places I think you should know about and that you would like.

Why do I make that point so strongly? Because this post is about a place that doesn’t really fit the bill of a typical place I would likely send you to. But nevertheless, I’m sending you to Joey DTLA.

First, It’s not “a find” – it occupies a huge space in a high traffic intersection of Downtown, at 7th & Hope. It doesn’t have a particularly notable cocktail program – lots of vodka-based drinks, and they have a drink called the “Super Stoked Jack + Coke” … in the ‘Avant Garde’ section of the cocktail menu (and, while this is a place I’m recommending, I just have to put on the record that I find that ridiculous, and was nearly fatal to their chances. But, as I’m militantly optimistic, I kept an open mind..). The food is good, but you’re not going to go here to impress someone with their meal. It’s one of those “something for everyone” menus – everything from sushi to pastas to burgers to steaks to tofu bowls.

But, even though it’s been open less than a month, and it’s a gigantic space, it’s already packed every single night. So, given what I just said, why is that?

Because there’s an underrated skill in the restaurant world that’s hard to achieve, but that’s easy to see once you come across it. And that’s the comfortable, solid, well run, accessible, “4 quadrant” restaurant. A place that guys will hang out together, women feel comfortable with their friends, couples will go on dates, and people feel comfortable bringing their kids. Well-designed but recognizable. Welcoming but classy. A place that you might walk in and think “this is a little corporate” … but a place you will stay and eat and have a good time.

In the US, the absolute master of this is the Hillstone Restaurant Group. Here, they’re most well known as the owner of Houston’s, but they also own other restaurants, many of which have “Grill” at the end of their name – South Beverly Grill, Woodmont Grill, etc. Plus, places like Gulfstream, Bandera, and their eponymous restaurants, Hillstone. If you listen to chefs who run restaurant groups, many will tell you that Hillstone sets the standard. The standard for quality, operational excellence, and service. You might roll your eyes and be thinking “Really? Houston’s?” But if you think about it, Houston’s embodies everything I’ve said about general food quality – maybe not great, but always good – decent service, and an approachable but generally high quality design. And Joey is even better.

First, a couple pics. Hopefully, these capture what I’m talking about:

Joey already has 22 locations in Canada (I know … who knew?) and 3 in Seattle. This is their second location in Los Angeles, following their first in Woodland Hills. And it’s really saying something that a restaurant group like this has chosen to plant a significant flag right in the heart of Downtown. This is a place that feels more like it would be in … well, Woodland Hills. But you walk in and you immediately “know” this place. You look around and immediately feel comfortable. Does it challenge you? Not in the least. But that’s exactly why you go here. Because you know what you’re going to get. You can bring anybody you want because everybody can find something they like. It’s … easy.

The service is pretty great, too. If you have to wait at all, you get offered a glass of champagne. Which seems a bit extravagant and unexpected, but is so smart – they’re probably paying six or seven bucks a bottle in bulk (if that) and, for that modest investment, they’re doing something memorable that immediately makes you feel welcomed. When there was a delay in my server coming over, a manager jumped into action, brought more champagne, and spent the rest of the meal making sure we were taken care of.

And the place just has that “big restaurant buzzy” feel. There are a few places like that in Downtown – Terroni, Officine Brera, Majordomo – but they are more the exception than the rule, and this is the first one that’s this centrally located. It has a raised outdoor seating area that is already super popular as an after work “get a drink” place. It’s full of groups and couples and people celebrating things and people who just stumbled into it. It’s just … inviting.

So. Is this place going to get an amazing review in the LA Times? Probably not – in fact, it probably won’t get reviewed at all. Is this where you go when you want to “impress your friends” with a hip, cool, underground “DTLA” place? Nope. Are you gonna Instagram your dish? Probably not (but you shouldn’t do that anyway…)