The Anchor of an Emerging Corner 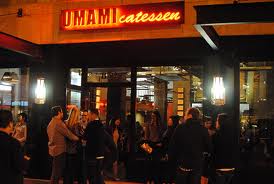 I’m going to spare you the big think/why-Downtown-is-so-great pablum that I usually give you (and that you love) and jump right in here.

Whenever anyone asks me where they should “start their night” Downtown, I don’t give them a specific place.  I give them a location:  6th & Main.  There are a ridiculous number of options just steps from that intersection, including Artisan House, the Association, Cole’s, the Varnish, Las Perlas, the Falls, Spring Street and, a little farther down, Crocker Club.  (I was going to link to all these but it takes too long.  Take a little initiative here if you’re curious.  I’ve written about almost all of these).  And, on top of that, it’s a reminder to those of us who have been around Downtown for a minute or two how far we’ve come – not too long ago, you wouldn’t be caught dead at that intersection (or, worse, you might be).  Now, it’s the epicenter of many cool things (including, once a month, ArtWalk).

But now, a new corner is emerging.  It’s not quite there yet, but it’s getting close.  Where is it, you ask?  Drumroll please …. 9th & Broadway.

What, you say?  9th & Broadway?  Yep.  9th & Broadway.  Now, I wouldn’t have said this until a true anchor opened.  A place that actually draws people there, and hopefully creates a ripple effect with people investigating the neighborhood and really discovering all that it has to offer.  And that anchor is Umamicatessen.

Yes, Umamicatessen is by the guys who created Umami Burger.  It’s essentially a full restaurant version of the burger joints popping up throughout the City, but they did an amazing job here.  It wasn’t immediately clear that a “quick serve” concept would translate into restaurant form, but it did.  Airy, inviting, well executed, friendly servers, a little irreverence – everything that should go into a restuarant sitting at the corner of 9th & Broadway.  Here’s a couple pics:

Unfortunately, the interior shot is a little small to make out, but it’s all woods and beams and just inviting.  Plus, they have a great cocktail program – somebody knows what they’re doing – and you’ve got to love a place that specializes in dessert.  (I had a pic of the dessert menu, but alas, couldn’t upload).

If you haven’t been to an Umami Burger, these burgers are absolutely incredible – their following already rivals In n Out by those in the know (GQ named it “Burger of the Year” last year).  Add in some charcuterie and the fact that they make their own cheese AND ketchup (and that they sell something called “Pork Corn”), and you’ve got a place I’ll happily return to many times.

OK, so you go to Umamicatessen, and you love it.  Now … what else?  Well, maybe you hit Pattern for a pre-dinner cocktail.  I’ve written about Pattern before (as a lunch place, but it might be even better at night), so I’m not going to rehash it here, but it’s a great place all on its own.

So … what else?  Maybe the Lakers/Clippers/Kings/Dodgers game is on and you want to catch some of it.  Or maybe you want something a tad more casual.  How about strolling on down to the Los Angeles Brewing Company, on 8th & Broadway?  LA Brew Co is a new edition to Downtown, and it’s something Downtown needs more of:  a straightahead, “it is what it is” place. It looks like this:

They also boast of having more beers on tap than anyone – over 100.  Here’s a look:

I’ve heard some people say/complain that LA Brew Co is “just” a sports bar.  To which I say “so?”  Not every place in Downtown can be unique – some places have to just be places you can go, have a beer, hang out, and not worry about it.  LA Brew Co is just such a place – and with Big Wang’s and Dublin’s getting crazy crowded, this is a nice alternative – and I bet it’s got more TVs than either of those places.

OK, so now you’ve had a good meal, been to a couple new bars … why would you go back?  Well, maybe next time, you’ll grab a bite at WoodSpoon, on 9th closer to Spring.  WoodSpoon is small, but it’s Brazilian food and where else can you get that in Downtown or even, really, LA? Sure, there are a couple of Brazilian places around, but this is a nice find.  It’s cute and looks like this:

OK, tried that, you say.  Next.  Well, maybe it’s been awhile since you’ve been to Tiara Cafe, on 9th & Main.  What, you say?  Never heard of Tiara?  I’m always surprised how many people don’t know of or forget about this place.  It’s airy and inviting, and serves great breakfasts AND lunches (alas, no dinner).  It’s owned by Fred Eric of Fred 62 fame, and it’s really one of the pioneers of this area.  It looks like this:

See?  Airy and inviting.  I like to hit Tiara every few months just to remind myself it’s there.

Still want more?  OK, we’ve got more.  How about Gram & Papa’s?  This is on 9th just past Los Angeles.  The team behind Gram & Papa’s own some great restaurants like Frontera Grill and Todd English’s Olives.  Their philosophy here is “Slow Food.  Fast.” and that’s what they do – they take really quality ingredients, and put them into sandwich/quick lunch form (again, no dinner).  Here’s the outside:

It’s small, but inviting.  And it’s fun to watch all the fashionistas walk by.  (some of you may remember my review of Ludo Febevre’s pop up restaurant that operated out of this location at night for a few weeks.)

STILL not satisifed?  Wow.  Aren’t we greedy?  OK, I’ve got one more.  How about L’Angolo Cafe, next door to WoodSpoon?  I’m not going to say L’Angolo is the most exciting or interesting place around, but it’s “casually elegant Italian” and why not?  Certainly easy to stop for a quick glass of wine or even an easy meal once you’ve explored everything else.  And they’ve been here for five years or so, so they get credit for that.   It looks like this (see?  casually elegant?):

And finally, I wish I could say (or even knew) more, but the guys who brought you Tasting Kitchen in Venice are opening a gastropub in the space of the late, lamented Angelique Cafe called The Parish.  It’s on the little traffic island where Spring & Main converge between 8th & 9th.  Tasting Kitchen is incredible (even for being on the dreaded Westside) and the cocktail program is insane.  My good friend John Coltharp, late of Seven Grand, has been holding down the fort at TK for awhile, and he’ll be behind the bar here.  He’s pouring everything into this one (no pun intended) and I, for one, plan to be there on opening night.  That will be the cherry on top of an already exciting scene that’s emerging in this emerging part of Downtown.

So, start with Umamicatessen (or, really, wherever you want) and work your way out from there.  There are plenty of cheap parking lots around (one of the virtues of going somewhere that’s “emerging”) and you’ll have a fun night.  Your loyal Enthusiast guarantees it.

No phone yet (duh)