One Night at Nola’s (or, why you should spend every holiday in Downtown) 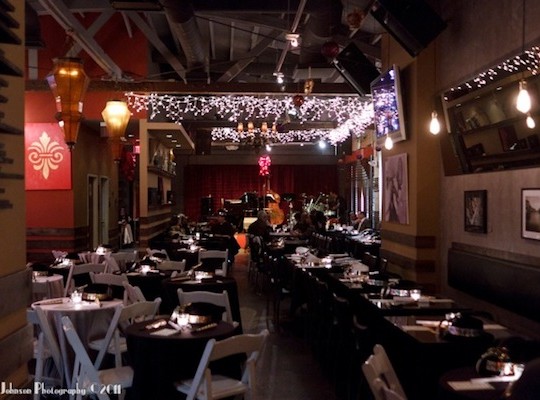 I’ve mentioned Nola’s a couple times on my little vanity project here, but never given it it’s own post.  Well, the time has come.

Why now?  Because Fat Tuesday, otherwise known as Mardi Gras, was a mere few days ago, and Nola’s was in fine form.  Regrettably, you’ll have to wait 350-some odd days to get your own taste of Downtown LA-flavored Mardi Gras, but Nola’s is worth checking out any day, any time.

Nola’s is in the Artists District, just a couple doors down from Zip Fusion Sushi at 3rd & Traction (if you knew of the late E 3rd, it’s in that space).  Pretty unlikely spot for somewhere that celebrates all things New Orleans.  But, just like the Big Easy, Nola’s thinks any place is a good place to party.

It looks like this.  If you look closely, you can see the stage at one end, which is where a lot of the fun happens:

Let’s start with why you should go to Nola’s even when it’s not Mardi Gras.

1) Southern food, with a light touch, right here in Downtown.   How many Southern places are there in Los Angeles, much less in Downtown?  Sometimes, you just need some good fried chicken, greens, and mac & cheese, and Nola’s will give it to you.  (seriously, the fried chicken is insanely good)  And, while I’m not going to characterize this as diet food, it’s certainly less ‘stick to your ribs’ than a lot of Southern places I’ve been to.

2) Live music, even at lunch.  I don’t think I’ve ever been to Nola’s when there hasn’t been music playing.  At lunch, it’s usually a guy with a guitar, and it’s usually quiet enough that you can just yell out your requests right there (and by ‘yell’, I more mean ‘ask the guy nicely from your table’.)  At night, they kick it up a number of notches – it’s simply one of the best live music venues in Downtown.  But what’s cool is that, because of the layout, if you sit at the farther end, you can just enjoy your dinner.  Point being is that you can just go for dinner without feeling like you *have* to deal with the music (though you’ll probably find it irresistible).

3) Committed ownership.  Nearly every time I’ve been to Nola’s, something has happened to impress me with the level of commitment the owner and management has to making this place great.  One time, they were hosting a private party during lunch.  They could have simply put out a sign or apologized, but they immediately gave us $10 off certificates and sincerely asked us to come back again with promises of even more free food.  Another time at dinner, the food didn’t come out right away, though it wasn’t even that noticeable, and without asking, a free round of cocktails came out.  And Cabrini, the proprietor, is a constant presence, making sure everyone is OK and, even more important, actively happy.

So for an out of the ordinary lunch, or a fun Downtown dinner, Nola’s will not disappoint.

But now, Mardi Gras.  Mardi Gras isn’t one of those ‘fundays’ that we all think of going out for, like perhaps Cinco de Mayo or St. Patrick’s Day.  But we were kicking around what we could do, and Nola’s hit us.  This was their first Mardi Gras since opening last July, and it was nothing short of spectacular.  The place was rollicking, the band was great, the food was plentiful, and everyone was living it up together.  For those of you who know what a Second Line is (I’m not going to explain it here), check out this 15 seconds of self-shot video – it takes a second or two to load:

Basically, the whole thing was what you’d want a local Mardi Gras celebration to be:  fun, communal, and organic.  I know the video is dark, but those white handkerchiefs are simple white napkins that Cabrini handed out.  She was determined to get a second line going, and believe it or not, that did the trick – we just needed props!  And we all had just come in from outside, bringing the second line out into the streets, at least briefly.

So why does this mean you should spend every holiday in Downtown?  Simple – because you can.  Or, more accurately, because Downtown is literally the only community in Los Angeles that offers something for every ‘occasion’ where you want to do something unique and special.  I’m sure St. Patty’s Day is going to be a blast at Dublin’s and Casey’s.  Cinco de Mayo?  Mas Malo, Yxta, or (sigh) Rosa Mexicano (and probably a bunch of other places).   Memorial Day, July 4th, Labor Day, Halloween, you name it – Downtown establishments always step up.   Heck, you can even have a great time on Repeal Day, known to any self-respecting cocktailian as the day prohibition was repealed on December 5th, 1933.

Still need more reason to hang out Downtown on these fun days?  Because, in spread out LA, committing to a place to spend your evening can seem like a bit of a crap shoot.  You find a place that *looks* fun, but you drive over there, you park, you find your way in … and then if it’s disappointing, you’re stuck.  You end up making the best of it, or you just go home.  In Downtown, it’s less of an “all or nothing” proposition.  If Nola’s would have let us down, we still could have made a night of it – Villains or Bottega or Artisan House or 7G or wherever.  Maybe they wouldn’t have been all set up for Mardi Gras, but the night would have been salvaged.  Point is, in Downtown, you have options.

So we’ll see you at Nola’s for Mardi Gras next year (though you’re going to check it out sooner), but in the meantime, St. Patty’s Day is up next!