Where To Eat Lunch Now

You feel like you’ve eaten everywhere there is to eat in Downtown. You’re sick of Engine Company, good and convenient as it is (and even though you still love the chili). Ciudad has lost some of its “new and different” sheen. Water Grill and Nick & Stef’s are too expensive, while Zucca and Roy’s are just a little … corporate. You’re looking for somewhere a little different. Maybe you want to impress a business contact, or you have friends in from out of town, or the new girl finally agreed to “just have lunch” with you. I’m here to help.

Where: Flower, just past 8th. Next to the somewhat sketchy Ritz Milner.

Vibe: Hip, boutique hotel with a little known restaurant on the right side of the lobby, usually with cool photos on the wall. The “fire and ice” feature in the lobby usually impresses people when they walk in the door.

Who to bring: That chick from Logistics you’ve been eyeing.

Fare: New American, with a little more creativity than you expect. Vibe: It’s a little like walking into a movie set -you feel like Denzel Washington will be in the back doing a deal with a shady Asian gangster. Way cooler than you expect, especially for the location.

Who to bring: The colleague in from out of town who wants to go somewhere “only the locals would know about.”

Fare: A steakhouse with Korean flair.

Try this: The Traction Burger – they grind kimchi up with the meat. You’ll like it even if you don’t like kimchi. 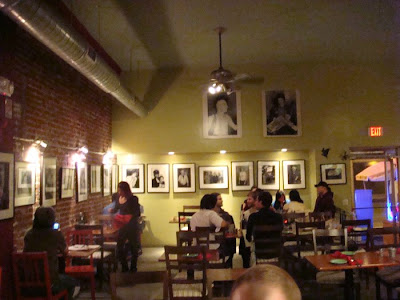 Where: 8th, just past Olive

Vibe: It is inevitably described as “that cute little Italian place.” The former chef at Ca Brea wanted to own his own place, so we get good food and super reasonable prices.

Who to Bring: The guy in the office next door who pops in and says “let’s grab some food, but I’m sick of [insert regular place here].”

Where: 7th & Grand. (not to be confused with Seven Grand, the bar which is a little farther up the street)

Vibe: Why is this nightclub open for lunch?

Who to bring: Someone coming to have lunch with you from the Westside.

Fare: Sandwiches to pasta to steak.

Try this: The roasted red pepper soup. Wonderful flavor with just a hint of spice.

Where: North side of Wilshire, between Fig & Flower … on the 21st Floor.

Vibe: Rooftop dining, but with a roof over your head. More people go here at night, so it’s relatively uncrowded for lunch … and they just lowered their prices.

Who to bring: Anyone from a new colleague to an old friend. The food isn’t exceptional, but it’s serviceable and it’s a nice-but-relaxed setting.

Try this: Shishito peppers, which are lightly breaded and a great way to start.

The Standard rooftop (or lobby)

Vibe: The lobby restaurant is very, very yellow … and somewhat boring (go for breakfast). But the rooftop is open to the world. If you go at noon, there’s a good chance that you’ll be the only ones up there – so you’ll actually get attentive service there for once. And you’ll feel like you’re on a little midday vacation. Try to resist the urge to jump in the pool – or don’t resist and make a day out of it!

Who to bring: Your friend who’s in from out of town. Or surprise that girl who thinks she’s “just going to lunch” with you.

Try this: The tarragon chicken salad sandwich, which is head and shoulders above anything else on the menu. Or, if you have the guts, order the peanut butter, marshmallow, and banana sandwich – it’s worth the splurge.

This is by no means an exhaustive list, but now you don’t have an excuse not to get out of the office and check out more of what this great City has to offer!