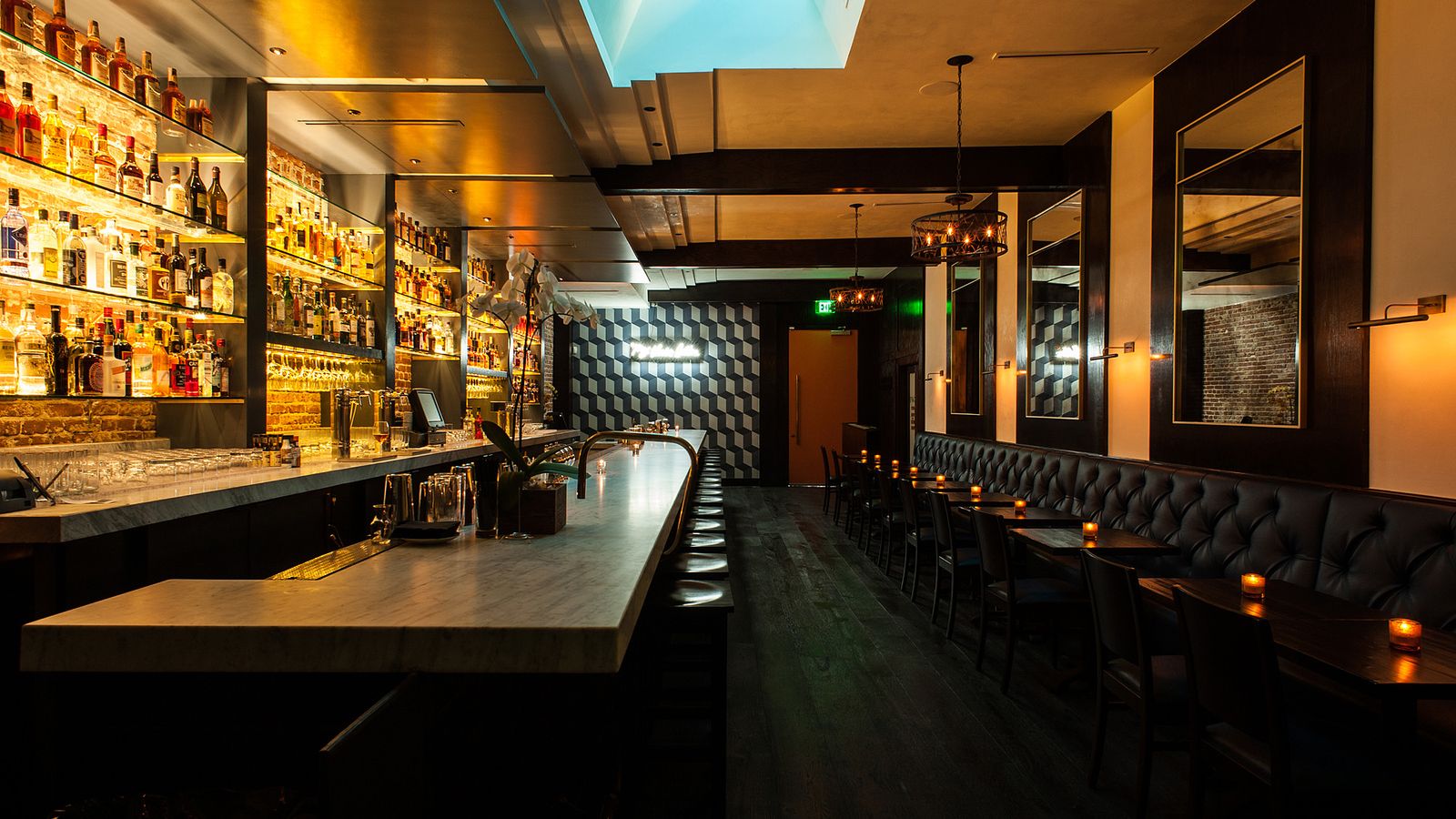 Today’s entry in the Downtown “spots you should know about” sweepstakes is remarkable for what it isn’t.  It isn’t flashy.  It doesn’t specialize in a particular spirit or particular cocktails.  The food isn’t gourmet – it’s downright bar friendly.  It isn’t “secret” – there’s the door, right there on the street.  It’s the Everson Royce Bar, in the far reaches of the Arts District on 7th, near Bestia.  (E.R.B. for short, to distinguish it from its Pasadena cousin).  Click on that link for a second, and see what it says.  “Reservations never required.  We want you to have your party here.”  Not pretentious, not trying for anything other than friendly.

But it’s also awesome for what it *is*.  First, the cocktails are incredible.  Not flashy, just amazing.  Which is what you might expect when the drinks and the ingredients and the training are all led by Chris Ojeda, who was one of the O.G.’s at the Varnish … which was only named the Best Bar in America a couple years back.  Until recently, he was Creative Global Bar Director for the Soho House (whoa), but now he’s back behind the bar.  Guys like Chris aren’t often behind the bar these days, so that’s reason enough to get yourself there (beyond, of course, that I am telling you about it…)

Second, the food.  Not flashy, just amazing. I might have had the best hamburger in Downtown when I was there.  And the munching I did off of other people’s plates were all awesome.  Which is what happens when you recruit a former James Beard award winner for Best Chef in the Pacific who was, until he took this job, the Executive Chef at Osteria Mozza.  (for what it’s worth, Chris Ojeda did the bar at that place, too)  His name is Matt Molina and he’s done (for now) with all that fancy food.  He’s really given over to just no frills, “give ’em what they want” cooking.  And he’s a team player too – when some folks noticed light from the kitchen spilling over into the patio, Molina agreed to cook in near darkness.  No drama here.

Third, the wine.  “Wait, what?” (you’re saying to yourself.  Trust me, you are).  “I didn’t think bar/cocktail places did wine.”  Or if they do, it’s some sort of swill they offer because they have to.  Not here.  Wines are courtesy of Randy Clement, one of the guys behind Silverlake Wine.  Which, if you don’t know, is one of the best wine shops in the City (and just down the street from my house.  Coincidence?).  Clement used to be at the late, lamented Campanile (which is where he met Molina), opened up Silverlake Wine, and then got pulled into this endeavor.  So aside from the inevitable on tap beers, there are wines on draft, and they are good, legit wines.  Not *fancy* wine.  Good wine.

Here’s what it looks like, inside and out.  Unassuming, but welcoming space:

Couldn’t find a picture of the back patio, but that’s cool too.  Communal tables, some games, the whole thing.

So why did I say Downtown needs more places like this?  Mostly because it’s unassuming but really high quality.  Too often, places are “neighborhood-y” – read: unremarkable – or they’re a little over the top with either the theme or the décor or prices or whatever, so they can be offputting to some people.  I mean, look, I love a lot of those places.  But E.R.B. is “just” a bar … yet it’s probably the highest quality “just a bar” place in Downtown.  Founded and run by uber pros – did I mention it’s guys who were behind the Varnish AND Osteria Mozza AND Silverlake Wine? – who know just what they’re doing  … and just what they aren’t.

Hell, they even have parking…