I haven’t blogged about it much recently, but my quest to eat lunch everywhere possible in Downtown lives on.

When I set out to do this, I had visions of ferreting out all those little dives that nobody knows about, raising their profile, proselytizing about them to the masses.

Which leads me to thoughts about the evolution of “the dive”. Calling a place a “dive” used to be a pejorative – like, that place is a real dump. And if you look it up in the dictionary, you’ll see that as the definition: a shabby place. But now, most of us use it as a term of endearment. If you don’t like a place, you’ll call it a sh-thole or just crappy or something. But if you want your friends’ ears to perk up, tell them you found this bar or a lunch place that’s a real dive, but it’s great. I’d venture to say that most of us now use the term “dive” to refer to a place with little to no decor, perhaps hard to find, not so inviting, but has some sort of charm or character or overall quality that redeems it.

But back to my quest. The hard reality is that most places that look like dives ARE dives, in the dictionary sense of the word. Most of us don’t know about these places because, well, they aren’t worth knowing about. This blog is about celebrating Downtown, so instead of telling you all the places I’ve been that are bad or just ho hum, I just don’t write about them.

Finally, though, I was recommended a place – a real dive – by a fellow Enthusiast that is blog-worthy.

It’s called Aladdin’s, and it’s on 12th & Hope. This place is one block and two worlds away from CorkBar. And it’s been here – or just around the corner – for 30 years. 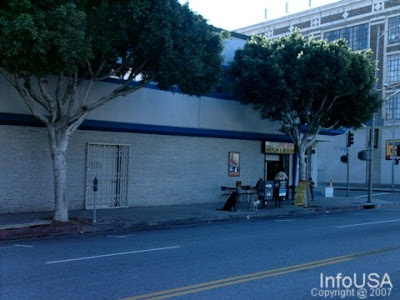 You drive up, and you’ll see a yellow sign that says “Aladdin Coffee Shop, Mexican American Food”. This is the best picture I could find – this is not a place that people typically take pictures of. You’ll see some random guys hanging out outside. You’ll think “Really? Is this the place?”

Then, you’ll walk in to a place that can’t be more than 200 square feet. The first pleasant surprise, though, is that there are actual tables where you can sit and enjoy your lunch. You’ll see what looks like a really small buffet set up. All the plates are styrofoam, and the utensils are plastic.

But the buffet changes every day depending on what’s fresh, what they haven’t cooked in awhile, or maybe what the regulars are requesting. One time, it included delicious breast of chicken in a white wine sauce. Another time, it was chicken with mole. There’s always beef, there’s always some sort of soup, there’s usually some kind of pork (the carnitas are so good), and it’s basically all you can eat. And when they run out, they run out – they’re only open until 2 pm. It’s all traditional and home made, and it tastes like it. I’d go back for the homemade flour tortillas alone. And I haven’t even been there for breakfast – they open at 6.

And THEN, on top of that, the kitchen is cooking up fresh stuff. Pupusas, sopes, enchiladas, quesadillas, with whatever cheeses or meats they want to cook that day. There’s no menu. You just sort of tell them what you feel like – or, better yet, ask them what they’re making – and voila. Plates of food.

Finally, the whole place is wrapped in a big bear hug by Cyndi, the original owner’s daughter. (Dad is also there, making sure everyone is taken care of in his broken-but-eager English). Cyndi is the one who will greet you when you walk in, make sure you’re OK, tell you what you should really try that day, and basically make you feel like part of the family. (if you tell her you heard about her from my blog, she’ll probably feed you even MORE food).

And it goes without saying that it’s all ridiculously cheap.

I’m not going to say that this is gourmet. It is homemade Mexican and Salvadoran food. It’s served in a tiny corner of the world that caters to construction workers, blue collar folks, and people in the know. But it’s served with love, and it’s a reminder that if you search through the rough long enough, it’s all worth it when you find a diamond.