Downtown’s Most Creative … and Labor Intensive … and Beautiful … New Bar 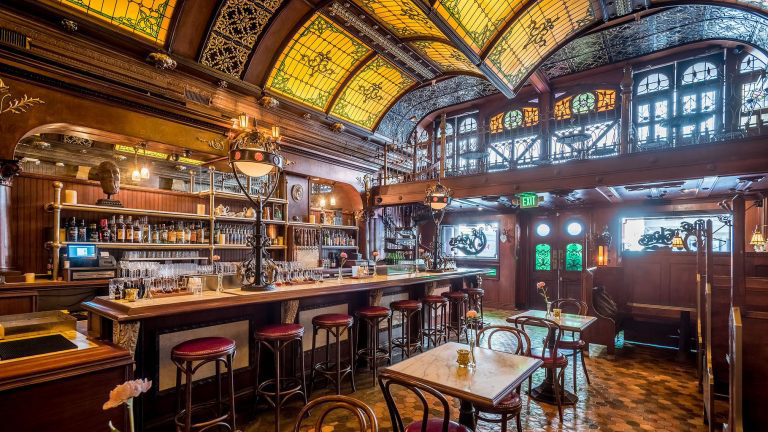 As I’ve said many times before, I frequently visit new places and think “I should probably blog about this at some point.”  But I hardly ever do.  Or else I procrastinate, and then just tell you about a whole bunch of places at once, all of which probably deserve their own post.  Ah, the burdens of being an influencer (that was a joke).

The point being that just because I don’t write about a place doesn’t mean that it doesn’t deserve your patronage … but that when I go somewhere new and I DO immediately write about it, well, I suggest you pay attention.  The bar is pretty high.

So, today, that place is The Wolves, a low-profile-but-three-years-in-the-making bar in the lobby of the historic Alexandria Hotel on Spring Street at 5th.

First of all, the room is grand, yet approachable, somewhat in the style of old European bars that just seem … lived in.  The fact that this place is new makes that feat even more impressive.

Here are some pics:

These might be a little small, but in any case, it’s cool.  You should click on their website and scroll through their Gallery – I couldn’t save/download the pics, but it gives you an even better sense for what you’re in for.  It’s going for 1910, same age as the hotel … and it delivers.

Suitably impressed, I checked out the cocktail menu.  Almost every drink has 6-8 ingredients … which immediately made me skeptical.  Drinks with a bunch of ingredients may look impressive, but sometimes that’s just a bartender trying to show off – many of the drinks at the Varnish, widely considered one of the best cocktail bars in the country, have 3 or at most 4 ingredients.   A cocktail basically has three elements: spirit, sweetener and/or bitterness, and acidity (usually in the form of citrus) – balancing those out well is what makes a great cocktail.   A whole boatload of ingredients basically makes me skeptical that they can pull it off – it’s still only 3-4 ounces of liquid, usually.

But then I noticed asterisks by probably 3/4 of the ingredients – and figured out that those denoted homemade ingredients.  Amaros and vermouths and liqueurs and bitters and even fermented fruits and vegetables.  I’ve never seen that before.  Homemade bitters?  Sure.  But homemade black currant liqueur?  Or homemade Korean pear vermouth?  Or plum amaro?  That’s new.  And it showed me these guys were serious, so I got intrigued.

Perusing the list, I see a “Banana Manhattan?”, with a question mark on the end.  Which is perfectly named, because that’s going to be everybody’s first response – “a banana manhattan?”  Now, I love me a good banana dessert (side note: why don’t more restaurants offer Banoffie Pie?  But I digress.)  And a Manhattan is my staple, go-to cocktail.  But a Banana Manhattan?  With Wild Turkey, and then fermented bananas, sweet vermouth, orange liqueur, and plum bitters, ALL HOUSEMADE?  I mean, I had to try it but, while impressed with the effort it no doubt takes to stock a place like this, my skepticism was still on high.

Then, just to compare, one of my fellow enthusiasts got the “Banana Cream with Some Herbs” cocktail, which started with bourbon and those fermented bananas, but added dill and caraway liqueur, lavender rose vermouth, orange crème fraiche, grapefruit, lemon, and vanilla bitters – you guessed it, all housemade.

Well, you know where this is going: they were both balanced and perfect and delicious.  The Manhattan tasted like, well, an awesome Manhattan with just a touch of that banana sweetness on the back end.  And then the cream drink was, yes, creamy … but not goopy.  And the herbs balanced out the bananas, making it somehow refreshing yet bracing.

There was also a drink that came in a huge beaker with smoke in it (ah, what Instagram has done to bar and restaurant menus), a drink that tasted like smoky pineapple, and lots of others that our group were intrigued by but couldn’t get around to.  Lots of incentive to return.  And what’s cool is that you can literally only get these drinks here – all those housemade ingredients make them unreplicatable (and that was a legitimate use of the word ‘literally’, for any millennials who might be reading).

There’s also a short food menu (all too rare in LA bars), and the service is on point – an “amuse booze” started us off, compliments of the kitchen, as was the homemade kettle corn. Servers were attentive without being cloying, and importantly, knew the menu cold.

This place is making a statement, but without shoving it down your throat.  Eater gave these guys high praise, headlining their piece “Downtown LA’s new cocktail mecca completely changes the recipe“, comparing them to the Varnish and Walker Inn, two of the best, no-compromises, next-level cocktail bars in the city, if not the nation – and I agree.  Fun fact?  Bartender and menu creator and ingredient maker Kevin Lee started all this at a place called Puzzle Bar in La Mirada.  La Mirada!  It was probably inevitable that he would migrate to Downtown LA, but birthing a place like this in La Mirada is so … LA (in the larger mythical sense).

Eventually, there will be an omakase style cocktail bar upstairs (set menu, higher prices, even more ambitious) along with live entertainment.

This place is on a busy, easily overlooked section of Spring Street, and a number of … civilians (ie, not cocktail types) … just ‘dropped by for a drink’ while I was there.  I was trying to eavesdrop as they checked out the menu, but sometimes places like this turn those kind of folks off – they just want their beer or their vodka soda.  So I’m rooting hard for their success.  But I do think that, especially once they get the whole place humming, the combination of quality, ambience, service, and beauty will bring people back and make this one of the bars that DTLA embraces and is proud of.

So.  You’ve got your latest destination.  This is a place to be adventurous.  Don’t be frightened – get the drink with seaweed bitters.  You’ll love it.